BHS’s track relays listed among the best in 3A 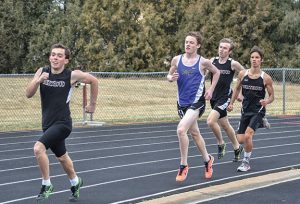 Relays and jumps continue to be strong for Berthoud’s track teams as they hosted the Berthoud Spartan Spike meet on Tuesday, March 21. Four local teams attended the meet: Loveland, Berthoud, Resurrection Christian and Thompson Valley. Team scores were directly in proportion to the number of athletes each team had competing. Loveland High had the most athletes and the most points. Berthoud had the second highest number of athletes competing and finished in second place, Resurrection Christian placed third and Thompson Valley, with their limited number of athletes attending the meet, finished in fourth place.

Much of the day finished just like that, with a few exceptions. It was usually Loveland High in first with Berthoud trying to keep close and Resurrections Christian taking the third spot. Miscellaneous “B” relay teams would keep the races interesting, but were not included in the scoring. Thompson Valley only entered individuals, primarily in the field events and 1600 meters, but no relay teams.

Berthoud won the boys 4 x 100m in a season record time. The male Spartans also crossed the line first in the 4 x 200m relay, though a poor handoff cost the team valuable time. The girls team won the 4 x 200m relay in a new season best time. The 4 x 400m relay, 4 x 800m relay and sprint medley relay chased Loveland around the track, and all of these relays set new season records too. The top 18 times in each division qualify for the state meet in May. Berthoud is currently in the top 18 schools for state qualifying in all relays for both the girls and boys.

Although Berthoud was chasing Loveland High most of the day, that doesn’t mean to imply the quality of performances were poor. Jake Rafferty won the 100m dash with a time of 11.60 seconds, just five hundredths over his best time last year. Rafferty also placed second in the long jump with a jump of 19’8.25”. Wyatt Woodrick is regaining his form with a third place in the long jump at 19’6” and fifth in the 100m in 12.22. In fact, Berthoud had five long jumpers entered in the meet and placed them 2-3-4-5. Ryan Schmad finished fourth in 19’1”. Trinity Buckley, who didn’t long jump in a meet last year, placed fifth just five inches from his best distance. Long jump coach, Mil Santos, has been working hard with the jumpers and the athletes are closing in on their personal-best distances and it is still March. Brock Voth won the triple jump with a distance of 38’8”, not near his best but better than everyone else. Connor Siruta won the high jump with a leap of 5’8” and Josh Doyle was third at 5’4”.

Berthoud’s throwers are improving. Jayda Chemamie placed second in the shot put with a throw of 30 feet Kailey Berry had the furthest discus throw for the Spartan girls. Zak Starkey was the top thrower on the boys side with a 97’3” toss of the discus for third place and 35’11” in the shot put for fourth place.

Berthoud will be competing at the Altitude Running Invitational in Ft. Collins starting at 8:30 a.m. on Saturday morning. Twenty-nine teams are slated to run, jump and throw at French Field.