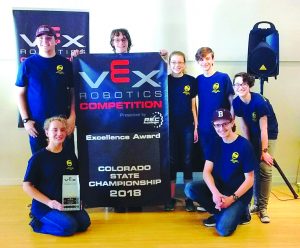 The Berthoud High School (BHS) robotics team Critical Mass landed a place in the world championship in April despite problems with the team robot.

Critical Mass, also known as 1069-E, won the Excellence Award in the Colorado VEX Robotics Competition, meriting a place in the world championship April 25-28 in Louisville, Ky. The team won the top award during the state competition Feb. 24 at Kent Denver School in Englewood and was among four BHS teams to compete, alongside teams 1069-A, Atomic Sparks; 1069-B, Argonauts; and 1069-F, Live Wire.

“They were in first place the whole day, and in the finals their alliance robots weren’t working well,” said Robb Sommerfeld, robotics sponsor and industrial technology department chairman at BHS.

Each team designed, built and programmed a robot to carry out tasks on a playing field, operating autonomously for 15 seconds and then through driver control for 1 minute, 45 seconds. The tasks change every year but involve moving objects and putting them in goals, while working against an opposing team alliance.

Teams compete in elimination rounds, working in randomly selected alliances of three teams in round-robin fashion. For each game, the teams are aligned in alliances of two teams and compete against another two-team alliance.

This year the teams played a game called “In the Zone.” They stacked cones on conical mobile goals and moved them into scoring areas, lifting up the goals and placing them on a post, using a hydraulic, scissor, pneumatic or other lifting device.

“Your robot had to be built to be able to multitask,” Sommerfeld said. “It has the ability to do multiple procedures. It can lift heavy objects, and it can expand up high to place objects on a high post.”

The autonomous program on Critical Mass’s robot failed to work consistently on competition day, though it had worked previously. Throughout the season of regional and state competitions, the team observed the robot behaviors of other teams to develop multiple autonomous programs, selecting the best one for each competition.

“The program wasn’t working as expected,” Sommerfeld said. “Prior, it ran flawlessly.”

As a result, Critical Mass placed second in the final round.

“They got close. They just didn’t make it in the final match, but they won the Excellence Award, which is even bigger,” Sommerfeld added. “They also won the Skills Award, dealing with their autonomous programming and driving skills. … They double dipped.”

The Excellence Award is given to a team for teamwork, robot design, professional presentation, the quality of the engineering notebook and placement in the competition.

“It’s definitely a lot of teamwork required for that. They’ve done an excellent job of putting everything together,” said Kurt Worrell, president of the Berthoud Robotics Club, that runs competitions for the Berthoud area. “That award is more than the robot doing well; it’s about doing well in multiple categories. … You have to be good at all those things to get the award.”

Sommerfeld is proud of the team’s ability to work through failure.

“We believe failure is an option and the more you fail, the more you succeed, because it’s through failure that these kids get better and better and their robots get more consistent,” Sommerfeld said. “They work really well together as a cohesive unit. They work hard with other team members to be successful.”

Three Turner Middle School robotics teams also will be heading to a separate world championship, also in Louisville, at the end of April. They earned their rankings in the Colorado VEX IQ Challenge on March 3 at Trail Ridge Middle School in Longmont.

VEX IQ, geared to elementary and middle school students, is based on completion of tasks, not competing against alliance, Worrell said.

“Taking the top two awards in state for middle school and high school is a pretty good demonstration of how Berthoud kids are doing.”