One of brightly painted, student-friendly trash cans located near the athletic fields at BHS for the summer.
Aaron Reynolds / The Surveyor

Anthropologist Margaret Mead once said, “We won’t have a society if we destroy the environment.”

While the debate of global warming continues to be a controversial topic here in the United States for those who believe we could be leaving a far smaller footprint on the environment – the work of three Berthoud High School (BHS) students will impress anyone, regardless of what side of the issue they support.

Emily Casper, Renee Raak and Gabrielle Mizer are three seniors-to-be that are currently enjoying the warm weather of summer break; however during the school year the three were busy participating in the Northern Colorado Caring for Our Watersheds contest.

What exactly is a “watershed?”

As Raak explained, “Every community basically has one. It’s an area where water collects itself. Berthoud is very close to the mountains, so the snow from the mountains will drain down and collect in the rivers (where it then feeds the community).”

The students were assigned the challenge of finding creative solutions to local watershed issues in their AP Environment class, and all three performed brilliantly.

In fact, out of 800 proposals submitted by high school students throughout the northern Colorado region, Casper took first, while Raak and Mizer (who worked as a team) took second.

The prizes were awarded after the students submitted a written proposal for their plan to address local watershed issues, implemented the plan and, finally, presented their idea to a group of nine judges at University of Northern Colorado in May. 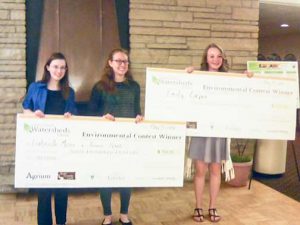 The girls had five minutes to present their project, with Casper highlighting her “Riparian Restoration Project” while Mizer and Raak introduced “No More Trash Talking.”

Casper’s proposal was to go out along the Big Thompson River and plant vegetation lost during the devastating flood in 2013. Upon implementation she quickly learned the numerous challenges to repairing an area wrecked by so much havoc despite several volunteers willing to help with the project.

“My original proposal was that I was going to go out with some volunteers and plant, but I realized that it’s really expensive,” Casper explained. “It’s a lot of work; you have to move a lot of boulders, and there is a lot of heavy machinery involved in it.”

Those familiar with the flood damage up the Big Thompson can sympathize with the countless hours already spent restoring the area. Casper estimates it will take at least two more years before the area begins to resemble pre-2013 conditions, with the introduction of trees and vegetation, part of what Mizer and her team of volunteers already contributed to.

Meanwhile, Raak and Mizer collaborated on “No More Trash Talking,” a simple yet crafty plan to reduce litter around the high school and, ultimately, reduce the amount of trash eventually ending up in Berthoud’s watershed.

“There was a budget limit, so we didn’t want to do something way out there,” Raak noted. “So we decided to take regular trashcans and make them more accessible. We made holes in the side so you wouldn’t have to open the lid to throw the trash away. We also painted them. They’re very eye-catching; they have a lot of bright colors on them.”

Mizer and Raak sat together in the environmental classroom and, despite knowing little of each other beforehand, quickly developed a stellar chemistry working together on the project.

Mizer said, “Working with (Renee) was absolutely – I’ve got to say – one of the best partnerships I’ve ever worked with before because we were on top of things and it was very smooth.”

Raak added: “We worked really well together; we didn’t have too many problems. If we ever disagreed on something it wasn’t harmful to the project in any way. We just decided on which option would be better and moved on from there.”

After the two finished painting five new trashcans (with the help from others) for the commons/lunch area of the high school, and Casper finished laying down seed along the flood-damaged area, it was time to present their projects to the judges. Casper described the experience as “pretty nerve racking.”

“I was actually the last person [to present] so the waiting process was pretty hard,” she commented. “[The judges] asked a lot of tough questions to get more of a feel of your project, which was what I was most nervous about. There is also a time limit of five minutes for the presentation. I could go on and on about this for 20 minutes, so it was hard to prepare and condense my whole project into five minutes.”

Mizer said, “We were watching the other people present, and there were lots of very good ideas and very good presenters, and seeing that we got second place it was kind of unbelievable because our idea was so simple we thought, it’s not that hard of a concept so it’s not that interesting, right? Then we got second place and it was just crazy. We looked at each other as soon as we won and both of our faces were like, “What?! We won second place.”

“A lot of other people had really good projects,” Casper remarked. “There were a lot of groups that did education, so it was a popular thing. So to have this project that was really unique stood out, the same with Gabi and Renee. We each had projects that really stood out. It shined a spotlight on us.”

Along with the prestigious honor of taking first and second place, Casper received $1,000 and Mizer and Raak $900. Furthermore the contest matches the prize earnings for the school, meaning the three raised $1,900 for BHS.

Yet despite the noteworthy titles and prize money, the girls remain first and foremost focused on improving the environment via a cleaner watershed here in Berthoud.

“We get water from it,” Raak summarized. “We use it for showers and stuff, so for me it’s very important. It’s pretty important to our daily lives.”