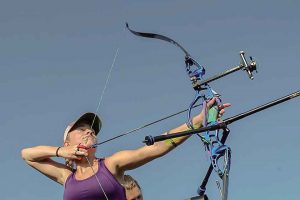 Berthoud High School senior Kira Bollar pictured with her bow at an event. She was the Rocky Mountain State Champion in 2015 and 2016. She currently holds five state records – two of which were the breaking of her own record this past year. She is the number-one ranked archer in Colorado and currently ranked 14th nationally for the United States Archery Team (USAT).
Photo courtesy of Kim Bollar

by Aaron Reynolds
The Surveyor

Kira Bollar might look like your traditional high school senior at school, but outside the confines of Berthoud High School she is an extraordinarily talented, nationally-ranked athlete who competes in archery tournaments across the nation. She first picked up the sport after being inspired by her father and brother – both of whom also target shoot.
It didn’t take long to discover Bollar was a natural. She was the Rocky Mountain State Champion in 2015 and 2016. She currently holds five state records – two of which were the breaking of her own record this past year. She is the number-one ranked archer in Colorado and currently ranked 14th nationally for the United States Archery Team (USAT). Bollar also earned Bronze Olympian this year in the outdoor season.
For those unfamiliar with the sport of archery, there are several variations: there are both indoor and outdoor competitions. Bollar competes at 18 meters indoors for the Junior Olympic Archery Division (JOAD). Outdoors, she is currently shooting at 60 meters in the 14-17-age “Cadet” division. Next year she will advance to the “Junior” division where Bollar will compete with athletes who have been in the Olympics – an ultimate goal for her as well.
While you don’t reach the acclaim and success Bollar has without some natural talent, her work ethic has enabled her to progress just that much further. During the summer, she averages five-six practices a week, while sticking to a more reasonable three-five times during the school year. Her coach – Mike Perrego – meets with her a couple of times per week for private lessons. Then there is her JOAD team she likes to practice with (when time allows) in Denver. She does all this while traveling around the country 18-19 times a year while maintaining a 3.5 or higher GPA.
Bollar recently returned from Chula Vista – home to the Olympic Training Center for archery, funded by the legendary Jim Easton. It was there Bollar earned an alternate spot on the Junior Dream Team (JDT) and was potentially inspired to spend the next year as a “resident athlete” working toward a goal of competing in Tokyo or beyond. Another option is to consider a collegiate program or club where archery is beginning to pick up attention here in the United States.
At nationals Bollar participated in a massive tournament that included over 1,600 shooters – 100 or more in her age group alone. This year she’s been to California, Alabama, Ohio and Arizona. The latter of the two stick out as especially positive moments.
“I really enjoyed Arizona,” Bollar admitted. “It was my first USAT tournament this year. It was outdoor, and I ranked ninth. It is the best I’ve ranked so far.”
Additionally, Bollar placed seventh at an Ohio tournament (where she shot personal bests in indoor and outdoor) officially placing her on the watch list of up-and-coming archers in the United States.
While the future is not yet clear for Bollar, the assumption is whatever path she selects will be bright. Surrounded by two loving, supportive parents in Chas and Kimberly, the sky is literally the limit for Bollar. She likes art – and while forced to give up track because archery has now become a year-round adventure, she is a young woman with an extremely bright outlook.
However, it is not to say hard work doesn’t come without a price – sometimes literally. Bollar is currently seeking sponsors to help fund the equipment, coaching lessons, airfare, lodging, food, and other expenses associated with traveling to and from tournaments.
As father Chas put it, competing at the level Bollar is requires a year-round commitment. “It never stops,” he admitted.
Fittingly, Bollar has a busy itinerary scheduled for 2017. She plans to continue and “improve (shooting) form and gradually moving up (the rankings)” with a vital tournament scheduled for New Mexico in April. She’ll continue to appear at JDT camps (that average four per year) while practicing relentlessly with anything from her first, classic wood bow (she bought with her own Christmas money) to the “very expensive” one she uses at tournaments.
Bollar – in her own estimation – said Colorado is “growing really well” in terms of appreciation, as well as participation, in archery. She has a boyfriend who also competes nationally in archery and has really appreciated the guidance and lessons taught by Perrego.
“He’s always enjoyed teaching,” Bollar acknowledged. “He loves to shoot. He really enjoys teaching people.”
While another article could be written regarding the difference between indoor/outdoor archery and the scoring – the general rule applies: get it closer to the bullseye (or “X”) and you score more points. Do it frequently and you are in the same position as Bollar.
The senior explains indoor/outdoor are “definitely different,” though outside the obvious changes in dealing with natural versus controlled elements, there are also technical challenges, such as having more space to shoot at outdoor tournaments, with the addition of scopes. You are also shooting from a significantly farther distance.
Bollar confessed, “I’m really enjoying outdoor right now. I really like them both. Overall my scores were a lot better this year (in general).”
“That wasn’t the way it used to be,” her dad added with a smile.
Regardless, it doesn’t matter. Bollar is but one of another long line of dominant Berthoud athletes chasing national as well as international acclaim in the vein of Tyler Carron and Nikko Landeros.