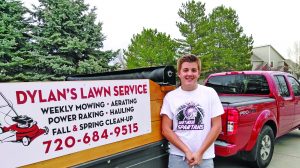 Photo by Shelley Widhalm – Dylan Carder, 16, of Berthoud, stands in front of his business sign for Dylan’s Lawn Service.

As soon as 16-year-old Dylan Carder got his driver’s license in March he bought a truck and some lawn equipment and launched Dylan’s Lawn Service.

Dylan has been mowing lawns and taking care of yards since he was 12, but with his license he could transform his way of earning extra money into an official business. He offers a full range of services that include weekly mowing, aerating, power raking, hauling, and fall and spring clean-up.

“This year it got bigger,” Dylan said. “It was more close people before. … Now my client base is beyond family and friends.”

Dylan, a sophomore at Berthoud High School, plans to study business management at Colorado State University and, upon graduation, grow his landscaping business. In the meantime he’s learned a few business skills and a work ethic from his parents, Nathan and Emily. Nathan has a 20-year career in injection molding and works for a company in Frederick, where Dylan also provides lawn services, and Emily owns and operates a daycare center, Carder Family Daycare, which has been in business for 14 years.

“My dad actually did it when he was a kid, and I wanted to follow in his footsteps,” Dylan said about Nathan, who mowed lawns for eight years through high school and beyond until he started his career in injection molding.

Dylan learned how to provide quotes, make purchasing decisions and save money, which he did to buy a used pickup truck, a trailer, and lawn equipment that includes a commercial mower, commercial aerator, trimmer, leaf blower and power rake.

“I saved up to buy the equipment so I could broaden what I do,” Dylan said.

Dylan expanded beyond mowing lawns to other lawn services, which he offers March to October, and he serves the Northern Colorado area. Once he graduates, he plans to offer year-round services that will include snow removal. He said he works an average of 10 to 15 hours a week and longer hours in the summer, plus is involved in cross country and coaches middle-school track.

“You want to be responsible to the customer, because they are the most important part of the business,” Dylan said. “If you treat them good, you’ll get more clients, and they’ll be happy.”

One of Dylan’s longtime clients is Gina Archuleta of Berthoud.

“He’s a fine young man, and he’s very social and very businesslike,” Archuleta said. “I’m excited for his future and his lawn business. … He’s got the right personality. He’s got the energy, and he’s got the equipment.”

Dylan provides a service for clients who may not have the time to do the work, or the equipment, such as aerators that poke holes in the soil to improve moisture content and power rakes that loosen dead grass and leaves from the ground.

“It really just gives the grass a good start in the year and helps it know it’s ready to grow when it’s warm,” Dylan said. “It really gives it a kick start.”

Dylan said he likes the personal connection he gets with his clients.

“I get to be out in the community meeting new people, seeing everyone and getting to work for myself,” Dylan said. “I really don’t like to be inside. I like to be moving around outside doing stuff.”

Emily and Nathan are proud of Dylan’s accomplishments with his business.

“We’re extremely proud of how he’s able to take this off the way he has and continue to keep his grades up,” Emily said.

Nathan finds Dylan’s starting a business to be bittersweet. “It’s bittersweet from a father’s standpoint. You spend time teaching and grooming them, and they get their license and do it without you,” he said.