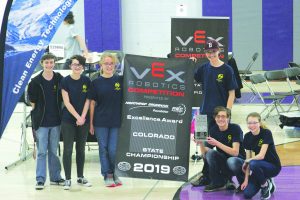 One of three Berthoud robotics teams that earned a place in state made it to worlds this year — a first for Berthoud High School (BHS) since the last worlds attendance in 2012.

“For any team to reach this level with the competition is an amazing accomplishment,” said Robb Sommerfeld, industrial tech and pre-engineering instructor at BHS. “It shows how much work and effort was put in by everyone on the team. It takes a team effort to get there.”

Team 1069E, also known as Critical Mass, won the Excellence Award during the Colorado High School VEX Robotics Championship March 9 in Parker — the award is the highest a team can earn and is for competition placement, teamwork, robot design and professional presentation. Team 1069E is led by Matthew Rottinghaus, a 12th grader at BHS and club president of BHS Robotics, which meets during the school year to design and build robots for various levels of competition.

Team “1069C was in the finals with Matthew’s team with 1069E, so it was really, really close at the end,” Sommerfeld said.

The Robotics Education & Competition Foundation manages the VEX Robotics Competition, in which thousands of schools participate in around the world each year. Dan Mantz, CEO of the REC Foundation, said, “As an experienced robotics mentor, I’ve seen firsthand the engineering skill and leadership expertise that students gain by participating in the VEX Robotics Competition. It’s an experience that will stay with them long after their school days are over, offering a new appreciation for STEM and laying a strong foundation of critical problem-solving, communication and teamwork skills that will serve them well throughout their lives.”

Teams 1069E and 1069C, along with Team 1069B, were among 100 teams to compete in state and represent half of BHS’s robotics teams. The three teams ranked in one of the regional robotics competitions held statewide from December 2018 to February 2019, earning a place in state.

In turn, three teams from the state competition qualify each year for worlds, which this year will be April 24-27 in Louisville, Ky.

“It’s an amazing accomplishment to be able to make it to state, because the competition this year was insanely competitive,” Sommerfeld said. “Every year there seems to be more teams and every year they are getting better.”

During competitions, which are randomly selected, they compete in elimination rounds in round-robin fashion.

Each team designs, builds and programs a robot to carry out tasks on a playing field autonomously for 15 seconds and driver-controlled for 1 minute, 45 seconds. The tasks, which change every year, always involve moving objects and putting them in goals.

“I’m always amazed at how students are able to apply design processes in a multitude of ways in their robots,” Sommerfeld said. “They start with a basic knowledge of the competition, then they start to brainstorm and go down the whole process of drafting a robot … and constantly refining it. … It is a collegiate and business level that they’re performing at.”

“I like the ability to shoot the flags and flip them. That’s a neat game idea for them to have,” Rottinghaus said.

Rottinghaus’s team built a slip gear to shoot the flags and an arm to flip over the cat-shaped objects.

“There are four motors on the base, so it’s one of the faster robots on the field, so we can score the objects faster,” Rottinghaus explained.

BHS has been to worlds five times and placed in 2012 when the students won the Excellence Award. There are many other awards, including Tournament Champion, Skills Champion, and the Judges’ Award.

“The level of competition gets harder, but it also means were preparing students for something beyond high school,” Sommerfeld said. “We’re having a blast doing it at the same time. There’s so much learning going on, but it’s so much fun.”

Berthoud Robotics provides fundraising and support for BHS Robotics, plus helps sponsor and provide a workspace for the elementary and middle school robotics clubs.

Rottinghaus joined the team to learn about different engineering processes and to engage in teamwork.