The robotics program at Berthoud High School (BHS) has two components: a club that meets during the school day and four teams that meet after school. 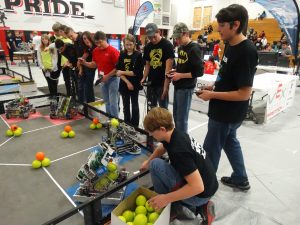 Courtesy photo- Berthoud robotics students use remote controls to maneuver their hand-built robots through a playing field during a previous VEX competition.

The school club meets during lunch on Thursdays to discuss the business of building and competing with robots, and the teams do the actual work. The students who are in the club also are on one of the teams, but the teams do not have to partake in the club — that’s because some of the students do not attend BHS and may attend other schools.

“There’s some people who don’t go to Berthoud High School and want to be involved in robotics, so we have the other organization, so that way middle-schoolers and home-schoolers can be in the club,” said Robb Sommerfeld, industrial technology and pre-engineering teacher at BHS.

Berthoud Robotics is the name of the after-school community club, which formed six to seven years ago as a nonprofit to support the teams. The students have to pay for a base robot kit to compete in competitions like VEX Robotics, purchase the additional components of their robots, and cover the cost of entry fees for the competitions.

VEX Robotics encourages education in STEM, or Science, Technology, Engineering and Mathematics, and offers different levels of competition from regional to world tournaments.

Once students get their kits, they design, build and program their robots to carry out tasks on a playing field and earn points toward a win. The tasks change every year, but essentially involve robots from different teams moving objects and putting them in goals while defending against their opponents.

“The programming that has to be done on these robots is just as professional as any other robot out there,” Sommerfeld said.

BHS 11th grader Matthew Rottinghaus, 17, a member of the Berthoud High Robotics Club, joined robotics as a ninth grader to learn more about it as a profession.

“I love engineering and creating new things and trying to solve new problems in the world,” Rottinghaus said. “It helps me get a taste of what engineers do in the real world. It helps me learn how they go about their design process.”

At each level of the tournaments the teams compete in qualification rounds and are teamed up with other teams through an alliance selection based on their skill levels. The team alliances, consisting of two teams, compete against an opposing alliance in elimination rounds to determine winning placement and the champion.

The team alliances, who may not know each other before the tournament, program their robots to carry out 15 seconds of autonomous play, followed by one-minute and 45 seconds of driver-controlled play conducted on the playing field.

“Every student I’ve seen come through robotics is successful,” said Sommerfeld, who also teaches a robotics class at BHS. “They have so much fun and work hard. They put a lot of hours into this.”

The teams that are part of Berthoud Robotics meet two to four times a week to build their robots and practice on a field. This year they are meeting at the old town hall space, 328 Massachusetts Ave., provided rent-free by the town of Berthoud. Their meeting location changes based on donated space. This year there are 25 students in the community club.

“It’s really up to the team how much work they have to put in to get their robot ready for tournament,” Sommerfeld said.

Robotics students who are part of the BHS Robotics Club meet for a half-hour to discuss any news items. They review robot designs and any problem areas and gather information about online competitions they could enter for a chance to place at the state or world tournaments.

“It gives them a chance to get together as a group,” Sommerfeld said.

The students discuss fundraising activities and suggest businesses to visit to ask for sponsorships — they need to raise several thousand dollars a year to be able to compete. What they collect is handled through Berthoud Robotics, which has a nonprofit status that allows for donations to be tax-deductible.

“A basic kit will run you $1,500, and that’s just to start. That won’t get you a robot to competition,” Sommerfeld said about the kits, which consist of motors, wheels and prefabricated parts that can be expanded with additional parts. “Every yea, the competition changes, so every year a new robot has to be built.”

This year one of the regional VEX tournaments will be held at BHS on Dec. 2, with the game called “In the Zone.” The game’s objective will be to program the robots to pick up and stack cones and move goals, also cone-shaped and weighted on the bottom, into scoring zones.

Rottinghaus and his team designed a robot that uses a scissor lift for the stacking.

The regional tournaments are open to teams across the state, and each year there are six to eight state tournaments, Sommerfeld said. Students can advance to nationals in two ways, by winning first place in a tournament or receiving the excellence award, an overall award given by judges based on performance and presentation.

The national tournament is in February 2018 and worlds, April 2018.