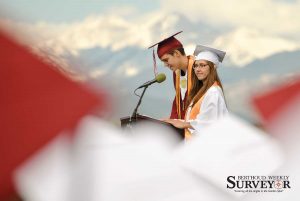 Berthoud High School Class of 2016 co-valedictorians Jonathan Bosnich (red cap) and Lexia Wyse, give their commencement speech to their classmates on Saturday, May 28, at the commencement ceremony at Max Marr Stadium.
John Gardner / The Surveyor

The students of the Berthoud High School (BHS) graduating class of 2016 are friends, but according to class co-valedictorians Lexia Wyse and Jonathan Bosnich the 167 students who received a degree on Saturday, May 28, are so much more than simply friends – they’re family.

“Family is how I describe the entire class of 2016,” Bosnich told the group of graduates and others gathered at Max Marr stadium. “My freshman year I was this socially awkward, home-schooled, new kid, but I never felt like the new kid. I was immediately welcomed by my peers and felt like I was part of an amazing group of people.”

Bosnich wasn’t exaggerating in his assessment of his peers. According to BHS Principal Chris Garcia, this year’s graduating class received more than $6.6 million in gross scholarship earnings, up from a 2015 total of $4.7 million. The class also had 35 students with grade-point averages between 4.0 and 4.3. Garcia told the graduates they had raised the bar, not only in terms of academics, but in athletics and in character.

Garcia spoke at the commencement ceremony that, over the past year, he’s been accused of taking the fun out of the students’ senior year and pushing them academically, but he said that was because of the expectation the kids set.

“The expectation was raised because of who you were,” he told the graduates. “Maybe that isn’t fair, but I think it sets you up to be successful and will help you in finding your way. Know that it wasn’t done just because we wanted to, it was done because we really wanted to take advantage of the talent you brought to Berthoud High School.”

BHS social studies teacher and guest commencement speaker Kayla Steele, who had a unique relationship with this particular class of students, provided the students with a bit of laughter while offering a bit of life advice. Steele began her teaching career at BHS the same day most of these students started freshman year.

That day, four years ago, presented Steele with what she referred to in her speech as a “moment” when she realized she was an adult. She offered examples such as the day when a parent brought home a child for the first time, or the first time they were able to eat chocolate cake for dinner and no one could stop them. She told the students she had learned a lot from them over the past four years.

“As you leave now, you’re going to hopefully discover in the next five years the lessons that I’ve learned over the last four; the lessons that you guys in large part have taught me, which is to embrace what it is that makes you special,” Steele said. “Embrace the thing that brings you joy in the world, because if you embrace the thing that brings you joy, at the end of the day you end up happy. And that makes other people around you happier.”

For co-valedictorian Lexia Wyse, the most important part of high school was the tests. Yes, the tests.

Wyse estimated she and her fellow classmates have taken approximately 100 tests during their high school careers and confessed a fair amount of their education will only be helpful during trivia night, such as knowing that most protein synthesis occurs in a cell’s rough endoplasmic reticulum. Yet the tests in the classroom won’t be the ones they remember. The tests she’ll remember are the life lessons she learned from her BHS family; lessons like telling the truth when it would have been easier to lie, or helping a friend through a difficult time.

“At some point or another, you’re going to get knocked down. All of us here have found some sort of family here at Berthoud High School to help us get back up,” she said in her address to the class.

Whether it be a family of friends, students, faculty, members of the community, or someone who provided a place to sleep when needed, just because.

“Each of us has had a place to call home because of those people,” Wyse said.

As the class of 2016 prepares for life’s next chapter, she urged her classmates to not be afraid to make a new family.