It is not to say the Berthoud High School (BHS) drama program was struggling when husband and wife duo Chris and Cheryl Kouns took over it back in 2014, yet what the couple have been able to spark in an often overlooked and neglected form of art in the 21st century is impressive.

The Kouns have created a reputation for challenging their young talent with electrifying plays and musicals that often stretch beyond the norms of traditional theater – the most recent of which being “Our Town,” which runs at the BHS auditorium March 22, 23 and 25. 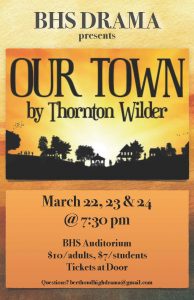 “Our Town” was written in 1938 by Thornton Wilder yet continues to be as relevant today as it was nearly a century ago. It also falls under the category of a “metatheatrical play,” meaning its story and the characters within it often break down the metaphorical fourth wall to not only acknowledge, but also address the audience directly – a rarity in the theater world.

According to Chris Kouns, it was the primary reason the couple opted to make “Our Town” their spring production following last fall’s musical, “The Wiz.”

“The reason [“Our Town”] is still around is because when [Wilder] wrote it he stripped out all the things that would make it so specific to a certain period,” Kouns explained. “That’s why there aren’t a lot of sets and scenery moving and everything, because he focused on the human story, and what it really is, is a slice-of-life story that stands the test of time.”

While “Our Town” was written in 1938, the story actually takes place between 1901-1913 in which a wide range of events occur, including what Kouns described as “human stories about growing up, about making a living, about family dynamics, about love, and ultimately about loss. What was true in 1901 is just as true in 2018.”

“Our Town” may tackle everyday issues such as life, love, death and heartbreak, yet what makes the set truly unique is its simplicity. Variations of “Our Town” rarely feature many sets or props, instead allowing the actors to create the setting and even act out using everyday items such as utensils and milk jugs.

“We are holding pretty true to Thornton Wilder’s vision of doing it exactly that way,” Kouns remarked. “When I say sets are minimal, we are down to two platforms, tables and chairs.”

According to Kouns, the directors have spent extra time with the students, teaching them what it means to pantomime, an ancient form of Roman art in which actors expressed meaning with gestures and without the aid of props. No detail is overlooked, like a specific example Kouns outlined where the mimicking of pouring a jug of milk into an empty glass becomes different over time as more milk is transferred into the empty cup and thus the weight is shifted from one hand to the other.

“There are details, and that’s the whole point of the show is that life is full of details we take for granted or don’t pay attention to,” Kouns said. “So part of the reason [Wilder] put pantomime in the show is to force the actors to pay attention to details and to invite the audience to see those details they never paid attention to before.”

“Our Town” shows at the BHS auditorium March 22, 23 and 25 (7:30 p.m.). Tickets are $10 for adults and $7 for students. It will also be an opportunity to appreciate costume designs from BHS graduate Sage Foley, who returned from London recently where she studied theater and is generously volunteering her time on the “Our Town” production.

Woman in the balcony – Genevieve Bayak

Woman in the auditorium – Maggie Horsch