This year, Berthoud High School (BHS)  has the largest cheer team in the school’s history, as the organizers try to grow the program.

“We are redoing the program and building it up,” said Jennifer Kingston, professional development secretary and dispatcher for safety and security at BHS and the head coach for cheer and pom.

Last year BHS Cheer had about a dozen girls, but this school year, the team grew to 24 girls when summer practice started in June and continued through August.

That number dropped to 21 at the start of school and is now at 17, with girls leaving the program to attend other schools or due to scheduling conflicts, Kingston said. Even with 17 members, the team remains the largest it has been over the years. 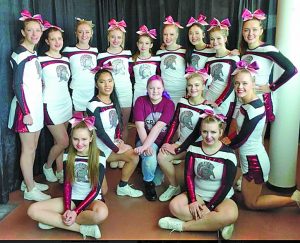 “We’re trying to build up this program with a lot of positivity and energy and class,” said Kingston, who coaches the team with Kim Gosch, assistant coach. “They’re very classy young ladies, and we just want this cheer team to be positive and to have a positive impact.”

The cheer and pom team cheers and dances at several varsity fall and winter sports, including football, basketball, volleyball and wrestling. The team cheers from August to March but doesn’t cheer for any of the spring sports.

The team cheers on the sidelines during the games and does pom dancing at halftime.

Ellie Dodd, 14, a ninth- grader at the school, joined the team at the recommendation of a friend.

“I consider all the girls on the team as my sisters and the coaches as my second family,” Dodd said, adding being a part of the team has helped her overcome her shyness. “It made me open up a little and be more confident in myself.”

The cheerleaders are required to know more than 35 cheers, including general cheers and cheers specific to each of the sports. They practice the cheers and dances, which last up to two minutes, three to four times a week at two-hour practices. They work on stunting, learning each of the positions for pyramid and other formations, including fly, base and spotter. And they engage in strength building to be able to do the lifts, along with participating in cardio exercises to increase endurance.

“These girls work very hard to learn all the cheers and all the dances, and they absolutely give 120 percent at all times,” Kingston said.

The cheerleaders support all of the school’s sports teams, providing banners for each team, including the spring sports of soccer, cross country and track.

Before a game, such as football, the cheerleaders show up an hour early to decorate the stands and put up a banner with a positive, encouraging message for the football team, such as, “We’re going to win tonight,” or “You got this.” The cheerleaders greet the guests from the home and opposing teams and distribute spirit sticks filled with candy and decorated with ribbons.

“They come in and welcome the guests and try to get a positive vibe going,” Kingston said.

Dodd likes making the football and other sports teams feel special with cheers specifically written for them.

“It’s really fun to get the crowd excited and the team excited,” she said.

The cheerleaders participate in competitions — this year they attended the state competition in December 2017, hosted by the Colorado High School Activities Association, or CHSAA, the governing body for high school sports.

“They didn’t rank, but they did phenomenally,” Kingston said.

The team, which competes in the 3A division, has placed in the top 10 in the past. The team is required to choreograph a routine that involves cheer, stunting and dancing, performed in front of judges.

“We have a lot of very new girls who never cheered before on our team. They did a great job,” Kingston said. “We’re not a competitive team this year. We decided to not compete in other competitions as we try to build up the program.”

Cheerleading is considered an activity, though supporters of the program believe it should be considered a sport.

“They deserve it to be considered a sport. They put in the time, effort and passion like all the other athletes,” Kingston said.

Plus, cheerleading teaches several skills, including leadership, accountability and responsibility.

“These girls stand up in front of all the crowds, and they have to feel good about themselves. They have to have the confidence to do that,” Kingston said. “It’s not just about cheering on the football team or volleyball team, you’re representing your school and you’re a leader in the school.”

Starting this school year, the team mentors a younger female student, including her in their practices and games, to help her build her confidence and abilities. The team plans to bring on one student a year. The team also offers fall and winter mini-camps for girls grades K-8 to practice and perform during halftime with the rest of the team.

“They’re leaders, and I want the girls to use their leadership skills in a positive way,” Kingston said. “It’s a perfect opportunity for my girls to make a difference in someone’s life.”