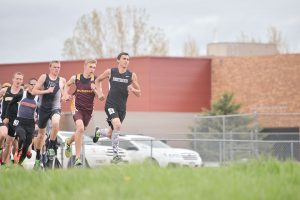 Berthoud’s top long distance runner Elijah Grewal competes at a track meet earlier this season at Berthoud High School. On May 5-6, Grewal was a huge part of the boys’ success as they captured the Tri-Valley Conference title, placing second in the 1,600 meters, third in the 800, fourth in the 3,200 and sixth as part of the 4 x 800-meter relay team.
Surveyor file photo/ John Gardner

For Berthoud High School (BHS) to be awarded the Tri-Valley Conference title in track is no big deal. What was different this year, though, was that it was the boys team who dominated the meet with a score of 150 points over second-place Roosevelt with 117.5 points.

When BHS track coach Colby Schultz was asked in March how the team was looking he stated, “It’s going to be tough for the girls to win another Tri-Valley Conference title.” The girls had linked a string of conference titles going back 10 years, including a 3A state title in 2011. Schultz did not expect it would be the boys team that would be dominating the conference meet this year.

“It’s always the girls who win, and we boys have to just sit by and watch them get their trophy every year. This year it is our chance to be the champs,” stated distance runner Elijah Grewal. Grewal was a huge part of the boys’ success, as he placed second in the 1,600 meters, third in the 800, fourth in the 3,200 and sixth in the 4 x 800-meter relay with underclassmen Ty Willams, Kade Leonard and Josh Doyle. That is four miles of racing in two days. Grewal was given the choice to not run all of the distance events so he could concentrate on qualifying to state in his best event – the 800. But the senior stated, “It means more to me to win the championship as a team than it does for me to go to state alone.” Grewal has one more chance to qualify to the state meet this Friday at the St. Vrain Invitational.

The senior class dedicated itself to scoring as many points as possible. Max Bump won both the shot put and discus throw. Bump set a meet record in the discus at 147’10”. Jamie Grey placed second in the shot put and third in the discus. Chad Ellis was second in the 400, fourth in the discus, and anchored the winning 4 x 200 relay and the fifth-place 4 x 100 relay. Everett Owens won the triple jump. Dylan Adaza placed third in the high jump and fifth in the triple jump.

If this year kindled a fire for the Spartans, the future looks like a volcanic eruption will occur for the boys team. Sophomores Jake Rafferty, Trinity Buckley and Wyatt Woodrick were on the winning 4 x 200 relay and the 4 x 100 relay. Ryan Schmad placed fourth in both the 200 and long jump. Rafferty was sixth in the 200. Woodrick won the long jump. Brock Voth placed third in the triple jump. Cally Castles was fourth in the high jump. Junior Cooper Skoric placed third in the 300 hurdles.

The girls from Berthoud placed third with 108.5 points, behind Roosevelt with 163 points and Windsor with 129 points. The seniors were a driving force on the girls’ side as well. Kristina Cavey won the high jump, placed fourth in the discus, seventh in the 800, and ran a leg on the 4 x 400-meter relay. Kelly Chamberlain placed second in the pole vault and ran legs on the winning 4 x 100 relay and fifth-place 4 x 200 relay. Alyssa Strong scored second in the triple jump and 100 hurdles. Catherine Meeker placed sixth in the 200, eighth in the 400, and was on the 4 x 100 and 4 x 400 relays. Ashlyn Fahrenbruch joined Meeker on the three relays and was eighth in the long jump. Sonya Schuppan placed ninth in the 800 and joined fellow senior Annika Jessen and sophomores Maycee White and Alyssa Radloff for sixth in the 4 x 800 relay. Josie Spitz won the pole vault.

With a team of strong seniors, many of the younger girls did not compete at conference this year. However, some shining upcoming stars include freshman Cailey Archer, who placed second in the high jump and fifth in the 400. Archer also ran legs on the 4 x 200 and 4 x 400 relays and sophomore Sophie Visger, who was a part of the winning 4 x 100 relay. Sophomore Samantha Mulder was fifth in the 300 hurdles. Junior Jessa Megenhardt was seventh in the triple jump. Freshman Cora Fate ran the first leg of the 4 x 200 relay.

This week, the athletes who are in the top rankings in the state will compete in the St. Vrain Invitational on Friday at Longmont High School. The meet starts at 12:30. This is the last chance to qualify to the state meet.