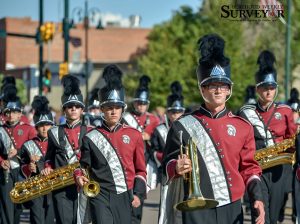 The Berthoud High School marching band pictured performing at this year’s Homecoming
parade on Sept. 17. The band will make its way to Pueblo on Oct. 26 to perform for the judges
at the 2A high school band state competition.
Surveyor file photo / John Gardner

According to Grotzky, the state competition will be very similar to regionals, where each band is granted “15 minutes to perform and is judged on everything from music quality to marching to visual effects.” Each band will perform, and the top four scored by the judges will advance from the semi-finals to finals taking place later in the evening. Berthoud’s semi-final performance is scheduled for 10:30 a.m. at the DeRose Thunderbowl located on the CSU-Pueblo campus.

Grotzky selected the cinematic “The Jewel and The Dragon,” by Randall Standridge, as the music that will be performed in Pueblo. The number tells the story of a dragon that stole a magic jewel from a faraway kingdom and the hero’s quest to retrieve it. Grotzky explained “The Jewel and The Dragon” was selected early in the summer as the music that would be performed this year. Then it was a matter of meeting with the drill writer to begin planning the formations and visuals that would be added to the performance.

While Grotzky has only been at BHS for a couple of years, he is no stranger to the Front Range, having also served as the music and band director at Northridge High School and St. Joseph’s Catholic School in Fort Collins. Every year there is “a lot of communication over the summer” between the band director and drill writer to produce a fresh and entertaining performance. Grotzky noted every single detail must be closely analyzed, including “how many kids are in each section” and “where you feel you want to drive home the music visually.”

In addition to regionals, the BHS marching band has also recently performed at unsanctioned events in Greeley and Boulder, where Grotzky observed the group has achieved with “no major errors.”

“[The music selection] is a concept that is easy to understand, yet every year you start out with so many kids, some come and some go, but the group has done a pretty good job of adapting,” Grotzky said.

The BHS marching band consists of 35 students this year with classes held four days a week and additional practice time reserved for Tuesday evenings and Saturdays. The marching band has also performed at every home football game this season, and you can catch one final performance Nov. 6, when BHS hosts Roosevelt High School for senior night.