The sense of community is very strong in Berthoud.

Just one of many examples occurred Friday at the Berthoud Fire Protection District (BFPD) headquarters where the BFPD board of directors joined Chief Steven Charles and the family of Phil Pennock, a longtime Berthoud resident, 40-year member of the BFPD and community leader, to dedicate the renovated and remodeled facility as the Phil Pennock Training Facility and Public Meeting Rooms.

“It’s a recognition of two things, one is the recognition of the Pennock family contribution financially to the project and the other part of it is recognition, by using his name, of his service,” said BFPD Board President, Dan Hershman, during the ceremony. The Pennock family’s donation covered 20% of the $600,000 cost of the project, which has transformed the facility from bland meeting rooms into a state-of-the-art facility that has received nationwide attention. 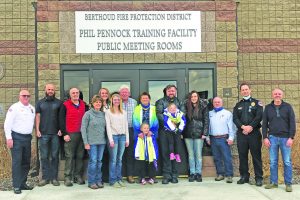 Pennock was born in Longmont April 12, 1932 and served six years as a United States Navy aviator during the Korean War. Following his honorable discharge from naval service, Pennock and his new wife Maryanne settled in Palisade, when Pennock joined the volunteer fire service, before relocating and settling for good in Berthoud in 1962.

From 1962 onwards, Pennock and his family which now included four children, became fixtures in the Berthoud community, Pennock served on numerous boards, including the BFPD Board with 14 years spent as president, and as a 4-H leader. Pennock was instrumental in securing passage of the bond measures that build the community center that now dons his name as well as the second fire station west of Berthoud. He developed and deployed Berthoud’s first wildland firefighting team and the BFPD’s tactical medial team. “We do all the things we do now on the shoulders of Phil,” Hershman said.

The renovated facility has advanced technology and ample space, as BFPD Captain Andrew Kuiken outlined during a demonstration that covered just a fraction of the new facility’s offerings which include WiFi for 100 devices, outlets and hardlines for technology hardware, cameras to various offices and meeting spaces, including Loveland’s facilities to conduct joint-training sessions and multiple projectors and the like.

“I asked the chief if I could have a couple thousand dollars to repaint and maybe move a wall and this is what it turned into…we ended up with this beautiful facility,” Kuiken said. “This was finished right when COVID hit and this facility has allowed us to do trainings remotely, to have large groups here, it’s set the tone for the new training program.”

In the brief time it has been in use, the Pennock Training Facility has hosted law enforcement and served as a command post during last summer’s riots, allowing law enforcement to watch officer’s body cameras in real time. The facility will serve as the national headquarters for a first responders peer support network for those suffering from PTSD and related conditions.

As Kuiken said, “None of this could have happened without the Pennock family’s generous donation, it’s following in the standard of excellence that Phil set up here.” That is what Berthoud is all about.