Berthoud’s Tanner Coble is a shot above the rest

It is amazing that just a small piece of tape – masking tape – can make a world of difference. 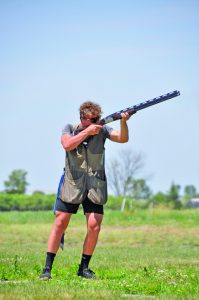 Courtesy Photo – Berthoud’s Tanner Coble, pictured here shooting with his 12-gauge shotgun, finished in the top-10 in the 4H National Sport Shooting championships this past June in Nebraska.

For Berthoud’s Tanner Coble, about to begin his senior year at Berthoud High, a small piece of tape put over his left eye a decade ago helped begin a life of collecting ribbons and accolades as a sport shooter.

Late last month, Coble returned home from the 4-H Shooting Sports National Championships having won fourth place in trap, ninth place in skeet and 10th place in high overall. Coble began sport shooting with his father, Ben, when he was just nine years old, but had trouble, whether when hunting small game or just sport shooting. After joining the 4-H program, Coble learned he does not have a dominant eye.

“When I first started shooting, I was having trouble hitting birds and then a leader of 4-H club came up with the idea and he put a clay in the dirt and had me shoot it and I could not hit it to save my life. So, then we put a piece of tape on my left eye and I smashed it right away,” explained Coble. “Whenever I shoot and look down the barrel, I see two barrels, one is the side and one is the top with the rib.”

Coble briefly employed an eye patch as a fix, forcing himself to focus with just one eye, as is typical for the predominant majority of sport shooters and hunters. And while he just stumbled upon the fact that he does not possess a dominant eye, a trait he shares with fewer than 2% of the population, using the patch was a short-lived endeavor.

“I had to transition from that; the transition had to be to just focus on the birds and I had to become hand-eye coordinated with my body to where my body knows where to move the gun and I can just look at the bird and shoot,” Coble said. “It took probably about a year until when I was consistently shooting better to the same as I was with the patch. Over time, I just became more consistent with my numbers and I just kept building up.”

For anyone who has never shot a firearm, the difficulty of hitting a target – particularly a moving target as is the case in sport shooting events like skeet, trap and clays, Coble’s three disciplines – is almost impossible to describe.

Coble would practice as much as he possibly could, between playing varsity football and wrestling for Berthoud High, and would do so at numerous settings, including the Berthoud Gun Club, and through a variety of club programs offered. “After wrestling ended I had more free time and I replaced that with shooting, I’d tried to shoot at least four days a week, two at the Berthoud Gun Club and then practiced in Watkins where I shot mostly skeet and went to various sporting clays shoots,” Coble explained.

After overcoming the hurdles his vision put in his way and established himself as one of the top youth sport shooters in the region, the COVID-19 pandemic threw a wrench into Coble’s pursuit of reaching the national event.

After turning in an effort where he ran 47/50 (47 target hits to just three misses) in each of the three disciplines to finish second place in clays, fourth in skeet and 21st in trap and win high overall, the pandemic resulted in the cancellation of the championships.

Yet the next season the state event was held virtually, but clays were omitted as the shoot involves varying backgrounds and obstacles that cannot be replicated in different settings, competitors fired 75 shots in each trap and skeet, with Coble going 65/75 in trap and a perfect 75/75 in skeet. While he knew he was very likely to qualify, he “waited and waited and waited,” in his mom’s words, for the invitation to the national finals to come. It did, and with it came the good news.

Coble earned his spot in the national finals, a once in a lifetime opportunity allowed only for high school seniors, and he made the most of it. Making Coble’s fourth and ninth place finishes all the more impressive was the fact that he was tied and had to enter shoot-offs in each, where he ran the table perfectly, breaking the ties in each disciple to put an exclamation point on his accomplishments.

Coble will pursue shooting in college, where he is also planning on majoring in engineering, either mechanical, civil or architectural, and is actively searching for the institution to fits his needs. Like many young people who achieve great feats in the world of sports, Coble’s sport shooting successes have instilled very important life lessons. As he succinctly articulated, “It’s taught me that one bad day doesn’t define the whole thing, you can always have your bad days as long as you don’t make them consistent.”