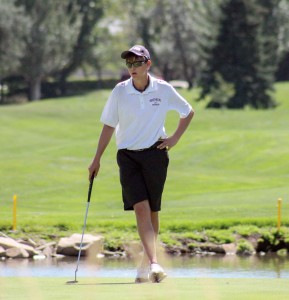 Berthoud’s Shawn Solem pictured at the Walt Clark Invitational at the Olde Course in Loveland on Sept. 3. Solem finished in first place after a head-to-head playoff at the 4A Northern Regional Tournament at Ute Creek Golf Course in Longmont on Tuesday.
Angie Purdy / Surveyor file photo

“I don’t have to worry about qualifying for state anymore,” said the Berthoud High golfer. “Now I can relax and just get ready for state.”

Solem has competed all year long, finishing in the top five in nearly every outing. Often times the BHS junior finished in second place behind Windsor’s Cole Krantz, however, on Tuesday at the 4A Northern Regional Tournament at Ute Creek Golf Course in Longmont, Solem finished atop the leader board to qualify for the state tournament in glorious fashion.

“It was awesome,” Solem said. “Knowing that I had won regionals, it was another relief.”

After finishing regulation play, shooting a course par 72, Solem found himself in a head-to-head playoff against Silver Creek’s Jackson Solem (no relation). The two played the Par 5, hole No. 1 at Ute Creek for the playoff.

Shawn said that he didn’t realize the position he was in until after he’d already finished his round and signed his card, partly because his coach, Mike King, didn’t tell him.

“King wouldn’t tell me where [Jackson] was placed,” Shawn said. “I figured he was hanging around even, or one under par.”

King admitted that he didn’t want to add to the pressure and just wanted Shawn to remain focused and play his game.

“I knew Shawn was nervous, but I was probably three times as nervous as he was,” King said.

Going in to the playoff, the pressure hit Shawn, but he managed to keep his cool.

“It wasn’t bad until all the spectators came to watch,” he said. “That put the pressure on; standing over the tee was scary but I managed to keep it in the fairway.”

After Jackson’s second shot came up short of the green, Shawn’s confidence took over.

“I thought I might as well go for it,” he said.

He hit his second shot within 15 feet of the pin, just off the right side of the green. That set up a two-putt for birdie and the victory. That was Solem’s fourth birdie of the day. He finished regulation with three birdies, three bogeys, and 12 pars.

On the front nine, Solem said that he actually didn’t play that well despite finishing at par at the turn.

“The front nine, I was just trying to survive and put myself in a position to finish well,” he said.

The back nine proved more difficult as the greens were rolling fast. He started the back nine with a bogey on 10 and he missed a birdie on 14 that could have meant a different outcome. He then managed to par 15 and 16, and birdied 17 which brought him back to par.

“He had a pretty darn good day,” King said.

Shawn agreed, saying that winning was nice, but it was more important to see that his game was good enough to compete with the best in the conference.

“Yesterday, for me, was really just about getting to state,” Shawn said. “The win was a bonus.”