He has dedicated his life to service.

Over the last three decades, Berthoud’s Ryan Armagost has served his country in the Marine Corps, in the Colorado Army National Guard, as a member of the Larimer County Sheriff’s Office (LCSO) and now he has his sights set on the Colorado State House of Representatives.

Armagost, a Republican and staunch Constitutionalist, does not have a challenger for the GOP nomination following the filing deadline and thus is the party’s de facto nominee for the newly drawn seat. 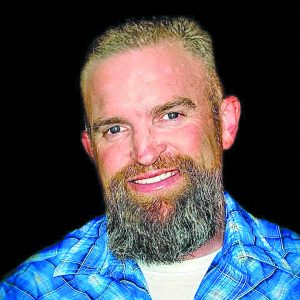 Colorado House District 64, created by the newly minted Colorado Bipartisan Redistricting Commission and approved by the state Supreme Court in November, encompasses all of Berthoud as well as portions to the east and northeast including Johnstown and Milliken as well as small segments of Evans and western Greeley.

Armagost, a Colorado native who grew up in La Salle, enlisted in the Marine Corps after graduating from high school in 1995. He served six years in the Corps, stationed in California and the Pacific, before joining the Colorado Army National Guard where he remained until 2017, working concurrently as a member of the LCSO.

As he explained, Armagost, throughout his service witnessed, firsthand, policies, programs and procedures that he believed distracted from the mission of the military and of law enforcement.

“Saw a lot, in terms of legislation, that was frustrating, diminishing for law enforcement purposes and goals, saw the same thing in the military, both federally and in our state,” he said. “Things that were done took away some of the camaraderie, forcing you to believe there was racism and homophobia and things like that in the military, mandatory training, mandatory briefings that people had to go through that tried to make you realize how racist you are, how un-inclusive you are and it took away from the morale all the time, we had to take time away from standard military training … no matter what your gender was or your race or your sexual preference, we’re all in the same uniform, we all took the same oath to the same constitution.”

Armagost recounted how he worked to bring about the Back the Blue rally that was held in Berthoud in the summer of 2020. The event, well attended and well received, provided a further impetus for Armagost to run.

“I didn’t realize how bad things had gotten politically, even in our own town, until I saw the

personal attacks on me and my character after (the Back The Blue rally) from people who opposed my opinions,” Armagost said.

Armagost organized Back The Blue Rally, in his words, “not only for the Sheriff’s Office, the Berthoud squad, but also for the community members to know there are people like you here that support law enforcement.” The event enjoyed broad and peaceful attendance, despite efforts to characterize the event otherwise.

Armagost considered runs for multiple offices, including the Berthoud Board of Trustees, but when the commission released the new district maps, he chose CD 64. The plan to run for office fit with his servant’s mindset, as he said, “I was tired of sitting on the sidelines and being upset with the way things were going, I wanted to be somebody in the actions, someone making changes for the better, I saw that opening and it was kind of a calling.”

As his campaign planks, Armagost wants to attack the spike in crime that has plagued the state of late, “make legislation that will hold criminals, especially violent criminals, more accountable,” while also addressing one of the root causes of crime, mental health. Armagost said that the state, despite efforts in the right direction, can afford to spend more on mental health and addiction treatment and prevention “without taking away money from other things.”

As a veteran himself, Armagost wants to address veterans’ needs, current veterans, retired veterans, homeless veterans, all veterans. “I’m involved with the veteran community, and I want to further that from a legislative role in being able to empower and enable communities to put together programs to help veterans,” he said.

“I swore an oath when I joined the military and joined law enforcement to protect and defend our constitution and I will do that throughout my life and will do so as a legislator,” Armagost said. As the father of a high school student, Armagost is unhappy with aspects of the school curriculum, including the controversial teaching of Critical Race Theory in Colorado of which he said, “it has no place in our education system, it’s teaching kids prejudice is all it’s doing, teaching them to believe they’re this and someone else is this, they are there to learn academics and that’s all they should be taught.”

Armagost supports parents’ rights, second amendment rights and the statutes of the Taxpayer Bill of Rights (TABOR). He believes that the Northern Colorado region should be a leading producer of oil and gas. As an avid outdoorsman, Armagost believes that oil and gas production and environmental protection are not competing values.

Most of all, he believes in service. “It’s service, community service, service to my county. I don’t have a political background, I’m not a career politician, I’m a small business owner, I’m not an elite millionaire, I’m not a trust fund baby,” Armagost said. “I’m a person who wants to see change and wants to be change; not a person who wants to get in there for power or prestige, get a seat and inflate your ego.”

“My campaign is that I’m a people person, I always have been, always will be, I’m not an unapproachable suit that people can’t talk to, I like to communicate, I like to talk to people, I like to get face to face. I’m not your stereotypical politician, I’m a jeans and tee-shirt guy, I’m tattooed, I spend my free time with my dogs and my son and riding my motorcycle, I’m just like everybody else. I have a desire to make change for the people and that’s why I’m running for office, I’m not going to change who I am, I just want to change what politics are.”

If elected, Armagost said his mentality would center around constituent service saying, “It’s serving everybody, not just the people who checked your bubble on the ballot, but everybody, how can you better everyone in your district, everyone in your state?”

Editor’s note: Ryan Armagost is a contributor to the Berthoud Weekly Surveyor.