Berthoud’s Paige Farnam to compete in the Junior Olympics

Sometimes a young person has an extraordinary gift. For some it’s an artistic gift; for others, an intellectual gift. For Berthoud’s Paige Farnam, it’s an athletic gift. 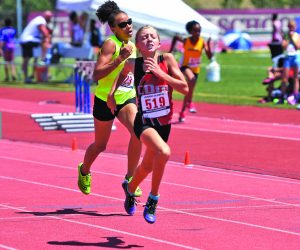 Courtesy photo – Berthoud’s Paige Farnam, competing in the 400 meter run at an event last year. Farnam will be competing at the Junior Olympics this week in Greensboro, NC.

Farnam, a soon-to-be 12-year-old who will be entering seventh grade this fall at Turner Middle School, has earned a spot to compete in the National Junior Olympics in Greensboro, N.C., the last week in July. Farnam’s signature events are the 400 meter run and the long-jump.

Farnam’s mother Tonya explained she and her husband Trevor noticed when Paige would play basketball with her older brother she was faster than the boys. As a family they decided to get Paige involved in the Colorado Athletic Recreation Association (CARA) track program in Longmont.

“What got me in to going competitive was my long jump, because I was a 10-year-old and I was jumping 12 feet, so that got me into club track and then I started doing the 400.” Paige explained, and said her coach was an Olympian in the 4×400 relay and he has really helped hone her skills. After watching Paige jump the coaches told Trevor and Tonya she has the chance to compete in the Junior Olympics and thus the family made a commitment to realizing that opportunity.

Like most young people who are involved in athletics, Paige explained one of the best things about it is making friends and having fun. As she said, “All the girls you run with, they always wish you good luck and when you’re done they say good job, and you make a lot of friends so that makes it more fun.”

Paige said she is “excited and I’m nervous,” about competing in the Junior Olympics, but once she gets there and gets into her groove she said it will just be another track meet, something she has many of throughout the summer months. The nature of sport allows for competitions to be held only during the warm-weather months, and the family travels to events, not only throughout Colorado, but also in neighboring states such as New Mexico, Arizona and Texas.

“It’s a nice commitment because it’s not year-round. She can still do other sports; we just work hard in the summer and she’s done really great,” Tonya said.

As Tonya explained, competing only during a portion of the year helps not only with the family’s hectic travel schedule but allows Paige to largely live the life of a typical 12-year-old. Paige, who also plays basketball and competes on the TMS track-and-field team, has participated in some practices with the Berthoud High School track team, giving her a leg-up for her future as a Spartan athlete.

“My goal is to get under a minute in the 400, and my goal in the long jump is to get close to 15 feet,” Paige said when asked what her goals are for the Junior Olympics. The competition is a week long, and the family will be departing for Greensboro on the July 26. Paige is planning to compete throughout the weekend, with the finals being held on Sunday, July 29.

“My mom and dad say when you work hard you can accomplish anything, so I work really hard,” said Paige. Her goal is to one day compete in the Olympic games, which she says is her dream, and it is one that does not seem at all far-fetched.