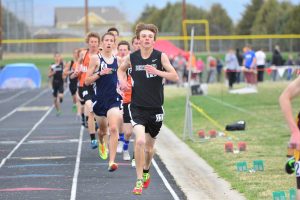 Five Spartans participated in the Longmont Invitational meet on March 28, and what an invite it was for Luke Spitz.
Thirty-seven years ago, Scott Hartley ran a 3,200 meter equivalent in 10 minutes, 12.10 seconds, setting the BHS school record along the way as a freshman.

“Scott was a good kid and a very good runner,” according to Berthoud track legend Max Marr. “He was smart too. You have to be to run at the Colorado School of Mines. He might have even won a title there.”

Hartley’s name is listed on the Colorado School of Mines’ records for the 3,200-meter relay, 2-mile relay, and distance-medley relay. The record in the 3,200-meter relay is the second oldest record at CSM in events that are currently contested. In 2009, Hartley won the 800 and 1-mile races at the 2009 USA Masters Indoor Track and Field Championships. He ran 1:57.89 in the 800 meters, just four seconds off his all-time best set when he was a collegiate athlete at CSM.

Hartley’s high school freshman time is the oldest Berthoud High track record on the wall of the school, but will now be replaced with a new placard for Luke Spitz. Spitz set the record while running in the elite heat of the 3,200-meter run at Evelyn-Montgomery Stadium; a race where nine of the top 16 times run in the state so far this year were posted. Spitz started out the first of his eight laps in last place, just where he wanted to be. He continued to run the pace he had planned and as the race unfolded, Spitz began picking off the competition. Moving up from 21st position, Spitz ended the race in 12th place, but nonetheless set the new school record with a time of 10:11.50.

Kiah Leonard ran in the elite girls’ 3,200-meter run at Longmont. Leonard maintained control in the early laps of the race holding to her race plan and holding back some energy for her second mile. Leonard came through the first mile in 5:48 and then began passing the other girls. Lap after lap, Leonard caught and passed girls until she had moved up to the lead pack. With 200 meters to go, it looked like Leonard might win the race. But Leonard ran out of track and could not catch the leaders in the final kick and settled for fifth place and her third fastest time she has run in the event. After running close to two miles, only 7 seconds separated first through ninth place.

Alyssa Strong and Kelly Chamberlain competed in the 100 hurdles. Strong qualified for the finals and finished eighth at 16.91 seconds. Chamberlain placed 11th in 17.41 seconds. Strong also competed in the triple jump and finished in third place with a jump of 35’ 3.5”, marking her fourth time over 35 feet. Chamberlain and Josie Spitz were invited to participate in the pole vault. Chamberlain finished just out of the points in ninth with a vault of 9’4”. Spitz, ranked fourth in the state, struggled with her rhythm and did not clear opening height. Surprisingly, with only two girls scoring points, BHS was able to place 17th out of 29 teams in the meet.

The Berthoud High School track team attended two other meets this past week, including the Golden Spike No. 2 event in Fort Collins on March 25 and the University Bulldog Invitational in Greeley on March 28.

A common saying in Colorado is, “If you don’t like the weather, just wait 10 minutes and it will change.” Such was the case on March 25 at the Golden Spike No. 2 meet held in Ft. Collins. The sun was shining when the boys sprint relay teams each took second place. The 4 x 100 relay team of Steele Castles, Jake Rafferty, Michael Woodiel, and Wyatt Woodrick ran 45.95 seconds. The 4 x 200 relay team of Cally Castles, Chad Ellis, Alex Paradise, and Woodiel finished in 1:36.39, to take. Junior Elijah Grewal was joined by freshmen Anthony Anema, Tyler Markell, and Ty Williams finished the 4 x 800 relay in 9:25 in third place, and the rarely uncontested 800 medley relay team of Woodrick, Brock Voth, Paradise and Levi Decker ran 1:44.96 also earned bronze.

The clouds began to cover the sun when Luke Spitz ran a personal best finishing fourth in the 1600 meter run in 4:48 and Woodrick leaped 18 feet, 10 inches in the long jump, placing fifth. Max Bump and Jamie Grey were able to fight through the light rain that came during the boys’ shot put with Bump throwing 44’6” for second place and Grey threw 40’6” for fourth. The rain got stronger during the discus throw and Bump and Grey placed fourth and sixth, throwing 126’4” and 120’7”, respectively.

With the rain finally pouring down, Maikcol Beltran, Chad Ellis, Paradise, and Cooper Skoric placed second in the 4 x 400 relay with a time of 3:48. On the girls’ side, Sophia Visger and Lydia Lind placed third and fifth in the 100 meter dash with times of 13.76 and 13.80, respectively. Lind pulled relay duty as well leading off the 800 Sprint medley team with Ashlyn Fahrenbruch, Catherine Meeker, and Caisey Ellis placing third at 2:01 and the 4 x 100 relay team with Kelly Chamberlain, Fahrenbruch, and Whitley Porter with a time of 53.92. Alyssa Strong won the triple jump in 33’6” despite the wind in her face.

Samantha Mulder ran 54.07 seconds for fourth in the 300 hurdles. Kiah Leonard was fourth with a time of 1:05.84 and Catherine Meeker was fifth in 1:05.93 for the 400 meters. Annika Jessen was fourth in the 800 run in 2:38. The 4 x 400 relay team of Emily Voll, Leonard, Caisey Ellis, and Jessen finished second in the pouring rain with a time of 4:41. Josie Spitz placed second in a jump off in the pole vault as some were considering ending the event due to the rain. Spitz tied with Chloe Woest of Fossil Ridge jumping 10’6”. As a tie breaker, the two continued jumping at lower heights until someone missed. Spitz missed the jump at 10’3”. It was the first time Spitz has been beaten this season.

Coach Colby Schultz was willing to put the individual ahead of the team totals by allowing some team members to attend the Longmont Invite. However, despite some athletes missing, the girls’ team was able to finish in seventh place and the boys’ team finished in 12th place out of 22 teams at the University Bulldog Invite on March 28.

Highlights include Emily Voll’s third-place performances in the hurdle events where she ran the 100 hurdles in 17.60 and the 300 hurdles in a personal best time of 49.73 seconds.

The relay teams posted the fastest times of the season in Greeley. The 4 x 100 team of Fahrenbruch, Lind, Meeker and Visger clocked a 51.97. Porter replaced Visger for the 4 x 200 and the girls ran 1:51.20. Both relay teams finished in third place. Sydney Siruta threw the shot put further than ever has to finish fourth in the meet with 33’10”.

The 4 x 100 relay team of Steele Castles, Johnson, Rafferty, and Woodiel continued to refine handoffs and won the event at 45.77. Max Bump added five points to the team total with a personal best throw of 127’, 5” for fifth in the discus and eighth in the shot put at 42’, 6”. Elijah Grewal and Triple Wadsworth ran personal best times of 4:53 and 4:54 for sixth and seventh in the 1600 meter run.

The next meet for the team will be the Golden Spike No. 3 meet at Rocky Mountain High School on April 1. No foolin’.