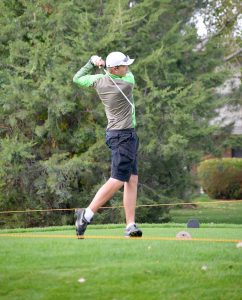 Berthoud’s Joshua Schumacher tees off at hole No. 1 at Fox Hill Golf Course in Longmont at the Colorado High School State Golf tournament on Oct. 5.
John Gardner / The Surveyor

Just before Berthoud High’s Josh Schumacher teed off at Fox Hill Country Club in Longmont for the Class 4A State Golf Tournament, he said that he felt “fine” and that it was, “just another day playing golf.”

Schumacher, a junior, shot a 36-hole score of 162 (79, 83), good enough to tie for 38th place in the 84-player tournament. Schumacher’s presence at Fox Hill marked the third consecutive year a Berthoud golfer has qualified for the state tournament.

A six-over-par 78 at Quail Dunes in Fort Morgan at 4A Regionals, good enough for a fifth-place finish, qualified Schumacher for State. At Regionals, Berthoud Head Golf Coach Mike King said the tournament made some players, “a little nervy,” but “Josh stayed steady, he was right there … he just kept at it.”

“It was an overall really neat experience to be included with very skilled golfers,” Schumacher said when asked about the experience of competing in State. “I felt a combination of nervous and excited. On Sunday I was really anxious for the tournament to just start.”

King said Schumacher’s 79 on day one of the tournament, “could have easily been a 74 or 75,” as the junior made the turn at a plus-one 36, only to card an eight-over 43 on the back-nine. On day two, Schumacher followed up a front-nine score of 39 (plus-four) with a back nine 44 (plus-nine).

“Overall there were holes I wish I could re-do,” Schumacher said.

Said King, “I know there’s a few putts I’m sure [Schumacher] wishes he could have back … he played good on the first day and okay on the second.”

King explained that, over the course of the season, Schumacher’s biggest strides came as a result of his learning how to play within himself, “Just because he can hit a four iron 240 yards doesn’t mean he has to hit it 240 yards when hitting it 230 yards is better,” King said as he explained that accuracy is very often a better forbearer of success on the golf course than is raw distance.

Surprisingly, senior Shawn Solem did not reach State for the third consecutive season. The senior shot a plus-16 88 at Regionals. “I think he was focused more on the then, on what’s next, rather than on the now,” King explained. Yet Solem, and fellow senior Braden Hull, both attended the second day of the state tournament at Fox Hill to follow and root-on Schumacher.

King made a point of emphasizing the large role that Solem has played the last several years in putting Berthoud golf on the map. “Shawn has really built the program here,” King said. “I’m really proud of everything he has done.”

While Solem and Hull, as seniors, will move on next season, the foundation that has been built will keep the Spartans golf team on the map in the years ahead. King made mention of Cameron Poll, Jack Hummel and Evan Poll as golfers with sky-high potential that will comprise the core of the Spartans squad next fall.