Berthoud’s Jimmy Fate is an All-American 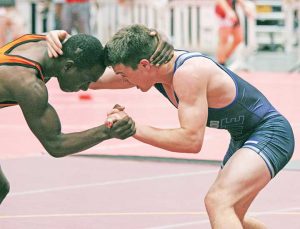 Berthoud High School’s two-time Colorado State wrestling champion, junior Jimmy Fate, traveled to Virginia Beach, Va. to compete at the National High School Wrestling Championships as part of the Berthoud based Colorado Elite Wrestling Club. Fate not only claimed All American status but took third place at the tournament that is considered the national championship for high school wrestlers.

“It was a great experience to wrestle against many of the East Coast wrestlers as well as the best from around the country,” said Fate. “Being a state champion is great, but my performance at nationals feels like an accomplishment at the next level.”

Fate was is unfamiliar territory since he hadn’t lost a match in 81 straight matches. While Fate was disappointed in not winning the tournament, the fact he had to win eight matches in two days to stay alive for third place was a tremendous learning and growing experience for the wrestler.

His first match was against a Texas state champion who had moved to Pennsylvania to attend Wyoming Seminary College Prep, one of the premiere high school wrestling programs in the country. Fate won 5-0, then faced the state runner-up from Washington and had a 7-5 setback.

“I made a mistake,” Fate said, “and against good kids you can’t do that or you’ll pay the price.”

After the loss, he was done for the first day of wrestling on Friday and had the arduous wait until Saturday to wrestle in the consolation round. To advance at best to the third-place match he would have to wrestle six matches on Saturday and two more on Sunday. He started Saturday with a wrestler from Pennsylvania and then New York, winning handily 10-1 and 8-0. Up next was the two-time Oklahoma state champ where Fate won 5-2. That was followed by a wrestler from Missouri who had just defeated a three-time New York champion to advance against Fate. Fate won 5-1.

The Maryland state champ and the Alabama state champion were in order for Fate to advance to Sunday and keep his third-place aspirations alive and he succeeded beating them 5-2 and 3-1, respectively. Winning six tough and grueling matches in one day rewarded Fate with seeing bracket action on Sunday. Another Pennsylvania wrestler was in Fate’s sights to start Sunday’s competition, but after a takedown by the rugged Berthoud wrestler, the Quaker State competitor suffered an injury and defaulted.

Last up for Fate was a wrestler from Ohio to determine third and fourth place, capping off eight matches against some of the best wrestlers in the nation. Fate won 7-2 to secure not only his placement on the medal stand but also All-American status.

To punctuate Fate’s determination to be an elite national wrestler he competed one week later at the Midwest Classic in Nebraska against yet again top-flight national talent and took home another third place. “This was a tournament I look back on and feel I should have won, but the past two weeks have been a great experience and definitely something to build off of,” said Fate.