The inaugural season for the Berthoud High School (BHS) swim team was nothing less than success, especially at the state meet.

The Spartan swimmers gathered at Eldora Pool and Ice Center in Fort Collins starting on Friday, Feb. 11, for the preliminaries. Out of the 13 events in prelims, Berthoud swimmers qualified for finals in 11 of them, including three relays and eight individuals. 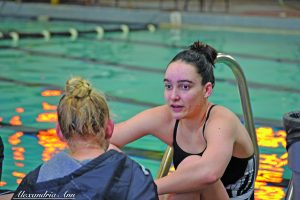 “I’m incredibly proud,” Head Coach Matt Goldsmith said, “I mean you look at where we started and we didn’t even know if we were going to be competitive within our conference, and these girls really just stepped it up and became a team, and we have great leadership on our team.”

Jamie Dellwardt, who has been one of Berthoud’s strongest swimmers all season, competed in two individual races in the prelims. In the 200-yard individual medley, she finished with a time of 2:16.20, which put her as the fifth-seed in the A finals.

In the finals she knocked nearly four seconds off her prelim time and was awarded third place in the state. The IM was not the only time Dellwardt made her way to the podium on Saturday afternoon.

Her prelim time of 1:00.40 for her strongest race, the 100 backstroke, was not ideal, although it did place her as the second seed in championship finals. Dellwardt wanted to break one minute.

The finals race for the backstroke was tight all the way through, as 10 of the top swimmers in the state competed. The winner came down to mere 10ths of a second.

Dellwardt not only met her goal, achieving a time of 58.21, but she finished in second place and expressed pride in the results of both races.

“I’m really proud of that. I knew I could do it, and I think that’s actually a personal best for me,” Dellwardt said with a beaming smile. “I just had to find the right time and the right competition. It made me so happy to see that time.”

“She just loves the sport,” BHS coach, Krista Markell, expressed about what kind of athlete Dellwardt is. “She’s just so enthusiastic about being a swimmer and doing her best.”

The second- and third-place titles she brought in were just a glimpse of the victories the Spartans achieved on Saturday.

The BHS 200 medley relay team included Kristina Ball, Arika Beard, Macy Fitzgerald and Marin Kasperbauer. The team swam a prelim time of 2:03.66, which was enough to get them into the B finals on Saturday where they placed 15th in the state.

In the 50 freestyle, Abby Dodd was Berthoud’s only finals qualifier, with a time of 26.48 in the prelims. She placed second in the B finals and 12th overall after she knocked .19 seconds off her original time.

The Spartans 400 free relay, consisting of Dodd, Kysa Keck, Hannah Roberts and Dellwardt, qualified for the B finals. They finished 11th in the state and shaved almost three seconds off of their prelim time.

The team of four also qualified for the B finals in the 200 free relay, in which they lowered their time by almost three seconds.

Sarah McCormick represented Berthoud in the one-meter diving competition on Saturday morning. In her preliminary dive, she received a score of 151.4 and in the semi-finals she greatly increased her score to 217.7 but did not make the finals.

“We’ve waited so long for Berthoud to have its own team,” Markell said, “It’s amazing that the school district has provided this opportunity for these girls and we could swim for our own colors. It’s just amazing.”

The Spartans first swim team was nothing less than exceptional, and it has created a path for swimmers for years to come to represent maroon-and-white.