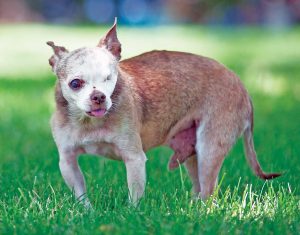 Harley the hero dog photographed at his namesake event, Hops and Harley.
Photo courtesy of Emily Taylor / The Surveyor

Heroes come in all shapes and sizes, and sometimes they are even missing an eye. Harley, a pint-sized Chihuahua, spent the first 10 years of his life in a puppy mill where he was used as a breeder dog. The conditions at the mill were terrible, and when his breeding days were over Harley had a missing eye, rotten teeth, parasites, diarrhea, and crippled back legs. He barely escaped being literally thrown away.

He was rescued from the Midwestern puppy mill and was adopted by Rudi and Dan Taylor of Berthoud. Harley has since become a spokes dog against puppy mills and an ambassador for National Mill Dog Rescue, a Colorado Springs-based organization that rescues, rehabilitates and re-homes discarded breeding dogs and works to educate the public on the cruel realities of the commercial dog breeding industry.

This sweet, tiny dog has touched hundreds of thousands of hearts since his rescue in 2011, through personal appearances and his Facebook page, which has more than 67,000 fans. He has also been directly responsible for raising more than $500,000 to rescue and provide medical care for more than 500 puppy-mill dogs.

This summer Harley received a huge honor. He won the 2015 American Humane Society Hero Dogs, Emerging Hero Dogs, an award to honor “ordinary dogs doing extraordinary things.” According to Rudi, “In the dog world, the Hero Dogs awards are comparable to the Grammy Awards.”

In September the Taylors and Harley will fly to Hollywood, all expenses paid, for a big gala to be held in Beverly Hills. In addition, Hero Dogs is sending a film crew to Berthoud within the month to make a video about Harley for the Hallmark Channel.

At the Hollywood event, which many dog-loving celebrities attend, one of the eight Hero Dogs will be awarded 2015 American Hero Dog. Voting remains open through Sept. 7, 2015, at 12 p.m. Eastern Time. Voters may read about each dog and submit their vote at www.herodogawards.org/vote.

Harley is elderly, and he won’t be around forever but, like many heroes, his legacy as a brave little dog with a heroic mission will remain long after he is gone.