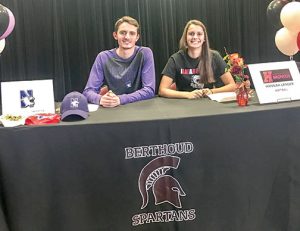 No matter the accolade or achievement – All-Conference, All-State, regional champion, conference champion, state champion – there is perhaps none greater for a high school athlete than that of National Letter of the Intent signee.

A pair of Berthoud High School (BHS) athletes, Liam Gately and Hannah Langer, put pen to paper and made it official their athletic careers would extend beyond high school, at BHS on Tuesday: Gately, a two-time state champion in the 500-yard free-style as a swimmer and Langer, a four-year starter and All Conference honoree as a softball player.

Gately takes his considerable talents to the Big Ten Conference where he will join 2015 Berthoud grad Jack Thorn at prestigious Northwestern University in Illinois, while Langer committed to continue her softball career at Hastings College in Nebraska.

Both were recruited by multiple schools and had a number of options, and each explained it was as much a gut-feeling as a cerebral decision of where they would play at the next level. As Gately explained of his visit to Northwestern, “Upon arrival, it really felt like it was a place that felt like home to me, the whole team and all the coaches were very welcoming.”

Langer said, while Hastings was not initially on her radar, a correspondence from the team’s head coach prompted her to take an official visit where, almost immediately after arriving, she fell in love with the school and its campus.

Both are planning on perusing courses of study in science-based fields; Langer in pre-med biology with the goal of working in sports medicine, and Gately is leaning toward a course of study in chemistry, but is yet to make a final decision. Regardless, Gately’s choice of Northwestern was one that was heavily influenced by the school’s stellar academic reputation. Said the two-time state champion, “Starting my college search I was looking for three basic qualities in a university, the first quality being a school where I would be academically challenged, where I would be able to come out of school and be well-prepared to go out and face the world.”

Gately went on to explain that “As a competitive swimmer, I wanted a program where I would be challenged in the pool as well.” And it was the combination of the athletic and academic challenges that tipped the balance in favor of the Big Ten school.

Each spoke eloquently about how balancing academics and athletics, and succeeding wildly at both, has shaped their lives in positive ways. “I’ve been swimming for a big portion of my life … one thing I realized as I got older, especially when I got to high school, is that swimming takes up a lot of time, especially when you’re doing it competitively,” Gately said. “You have to put a lot of time into it if you want to achieve greatness. It’s hard to come home late at night and still have about two or three hours of homework to do. Part of being an athlete is you learn how to cope with those things, having that drive athletically helps you have that drive academically as well.”

Langer remarked that, through the recruitment process she learned of qualities she did not know she possessed. Asked what she learned about herself through the process, Langer replied, “My persistence. I never realized what a persistent person I am. I just kept emailing coaches; I kept going at it to get what I want. It’s not as hard as I thought it would be, and I know I can do it.” It was as early as her freshman year, where she was surprised to make the varsity squad as a freshman, that Langer said she began to realize she could play collegiately. Said Langer, “Making varsity as a freshman, I thought, ‘wow, okay maybe I can play,’ and seeing so many [other BHS softball players] get to go play in college, I decided I didn’t want my softball career to end after four years of high school, I want to keep going, I’ve been playing my whole life.”

Both student-athletes will graduate from BHS in the spring. Gately will go for a three-peat as a state champion swimming for Thompson Valley, while Langer will close out her Berthoud athletic career on the track-and-field team.