Berthoud’s dominance on the mat continues 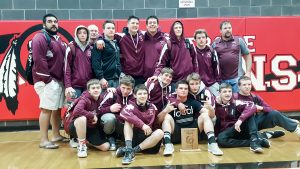 Berthoud wrestlers and coaching staff pose for a photo after winning the 12-team Montrose Indian Invitational on Jan. 9.
Karen Fate / The Surveyor

After a nearly three-week layoff for the holidays, the Berthoud High School (BHS) wrestling team returned to the mat and returned to the dominating form they had demonstrated in the first third of the season.

The Spartans won a Tri-Valley Conference dual with Frederick in extreme fashion, 75-4, and then took first place in the 12-team Indian Invitational in Montrose on the Western Slope. In Montrose, the Spartans scored 215 points as a team, easily besting second-place Olathe, who tallied 168. With the pair of victories Berthoud was able to solidify their hold on the No. 2 team ranking in Class 3A.

The night before the invitational, Berthoud participated in a dual with Olathe and were able to eke out a 38-30 victory over the pirates after the six-hour bus ride over the divide. Fate (160) won his bout with a pin in just 57 seconds, while Matt Bailey (132), Kyler Bailey (138) and Ben Poirier (152) each also won.

Hennig took third place by winning his bout in the heavyweight class over Trevor Barrett of Palisade, while Balliet pinned Montrose’s Kyler Keyes at 3:29 in 220s to also claim bronze. Freshman Brock Johnson won his third-place bout with a 3-0 decision over Ralston Valley’s Isiah Grimes at 145 pounds.