Berthoud’s Creager is a woman of influence 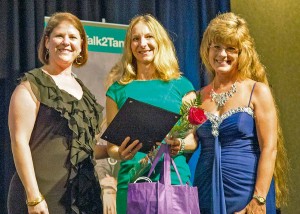 After attending a career day in high school, Caroline Creager knew that she wanted to study physical therapy. She moved from the tiny town of Wassila, Alaska to study at the University of Montana where she achieved her bachelors in science and physical therapy. Years later, with three kids and two businesses, Creager went back to school to gain her doctorate in physical therapy.

In 1995, Caroline and her husband, Robert Creager, moved to Berthoud.

“We were looking for good schools, plus Berthoud was small and reminded me a bit of Wassila, so I think it’s the combination of those two things that brought us here,” said Caroline.

Creagor worked as the director of rehabilitation at the Berthoud Living Center for four years. After becoming a mother, she decided that she wanted to have her own physical therapy practice.

“I really felt like Berthoud needed its own athletic club and the two businesses would go together well,” she said.

When the building at 247 Mountain Avenue went up for sale, Creager knew that it was the one. She purchased the building in 2003 and opened Berthoud Athletic Club in 2004.

Berthoud Athletic Club is a full-service gym, employing more than 20 individuals. They offer mainstream classes such as yoga, spin and Pilates, as well as Silver Sneakers classes for seniors. Personal training is also available.

“We’ve had a message since we started that exercise should be fun and it should be a life tool,” said Creager.

She runs her physical therapy office at the athletic club, where she and fellow physical therapist Vicki Hitchcock specialize in outpatient orthopedics.

“That could be someone who just had a rotator cuff surgery or it could be an athlete,” explained Creager. “We also are experts in women’s health issues, and I would consider myself a core strength expert.”

The practice continues to grow and Creager is currently looking to add another part-time physical therapist to her team.

Creager’s greatest passion is educating the world about tethered cord syndrome. All three of her children were born with tethered cords, so Creager is personally invested in the issue.

“I’m on a mission to educate people about what it is because I think it’s a lot more common than we think,” said Creager.

“At the base of our spinal cord we have a filum, which is sort of like a string. This string should be flexible like a bungee cord as children grow, but some kids are born with fat on the string and it acts like an anchor. As they grow their spinal cord and column cannot grow with them. It can cause some terrible things like scoliosis, leg length differences, weakness, bowel and bladder incontinence and pain. It’s very progressive and gets worse the longer it goes unnoticed,” she explained.

Creager has been chosen to speak about the syndrome at the National Physical Therapy Convention in Indiana next year. She will teach other therapists about tethered cord and how to recognize it. This is the first time the syndrome has ever been the subject of a presentation at this convention.

Eighteen years ago, Caroline Creager volunteered for Young Women of the West with an Entrepreneurial Spirit. Little did she know that she would have a major influence on the life of one of the girl she mentored through the program. She was paired with a student who wanted to become a medical illustration and it was a good match.

That student, Amy Clements, nominated Creager as a Women of Influence and stated that the three people who affected her most in life were her mom, her high school art teacher and Creager.

“Mentoring women and helping people has always been a passion,” said Creager. “One of my strengths is recognizing what people are really good at, even if it isn’t what they are currently doing, and I have a way of helping them get to where they really want to be.”

Creager was one 12 woman recognized at the Women of Vision Gala, earlier this month, a dinner organized by Colorado Women of Influence, LLC. The gala’s mission is to honor women from Northern Colorado who have made a difference in their communities, on a local, national or international scale.

“I was in great company,” said Creager. “There were a lot of well deserving women and I felt honored to be recognized and be part of a party of fantastic ladies.”