There are times when even the most seasoned sports fan, accomplished athlete or experienced coach has to just sit back in awe. A pitcher throwing a perfect game – a game where not a single batter reaches base – is one of those times. 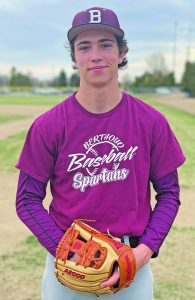 Photo by Dan Karpiel – Berthoud High sophomore baseball player Connor Jorissen made history last week by becoming the first pitcher in BHS history to throw a perfect game. Facing off against Skyview on March 30, Jorissen did not allow a single player to reach base in the three-inning, mercy-rule shortened contest that the Spartans won 20-0. Jorissen followed up that incredible performance by throwing a no-hitter against Thornton which Berthoud also won convincingly, 21-1.

Last Wednesday, Berthoud High School (BHS) sophomore pitcher Connor Jorissen accomplished that feat. Jorissen threw three-innings, faced the minimum nine batters, retiring six of them by way of the strikeout and inducing three more outs in the field. Berthoud, powered in part by Jorissen’s excellence on the mound, won the game by a 20-0 final score in the mercy-rule shortened three inning contest. The perfect game was the first in the history of the BHS baseball program.

For an encore in his next start, Saturday at home against Thornton, all Jorissen did was throw a no-hitter as Berthoud took the game by a 21-1 final. The Spartans did, unfortunately, commit four errors in the field which allowed the Trojans to squeak out a run, but Jorissen’s mastery was unquestionable.

“For Connor to do what he’s done games days in a row is amazing, I don’t care the opponent, they’re still a high school opponent, and it’s very, very difficult to no-hit any team. He’s been very crafty on the hill,” Berthoud manager Buddy Kouns said of his ace sophomore.

While Jorissen acknowledged his history-making feat, he remained humble, explaining the perfect game came in the mercy-rule shortened contest saying, “If it was a seven-inning game, I would probably count it a little bit more, it’s not exactly what a perfect game should be, it should be seven innings, but it’s great to have and something I’m proud of.”

One of the keys to being an effective pitcher is having the ability to keep hitters off-balance. A pitcher must not only locate his pitches on the corners of the strike zone but he must also have a repertoire that keeps the batters constantly guessing. Jorissen explained that, in addition to the fastball and changeup that compromise the bulk of almost every pitcher’s arsenal, Jorissen recently added a curveball to his available pitches and, more importantly, has developed the confidence to throw it when necessary.

“About two weeks ago I developed a curve ball, I started throwing it in games and it’s been working really well for me,” Jorissen said. “You really have to keep people off balance, they can never really expect what you’re going to throw and with three pitches it’s a lot easier to do that rather than with just fastball and a change.”

While Jorissen’s pitching prowess has been remarkable through the early throes of the 2022 season, the Spartans have been red-hot from the plate. Berthoud has won four of their last five games – the only loss a 7-3 defeat to Severance – and, perhaps most impressively, have scored 12, 25, 20 and 21 runs in their four wins. In Jorissen’s two gems, the Spartans only had to play three innings in each thanks to their incredible run production.

“It helps, the run support helps, we’re swinging the bat really good right now. I hope we start to clean up some stuff on defense and we need to get some dudes in that middle relief role where we’ve struggled,” Kouns said and made special mention of senior Lawson Dawe who is hitting north of .500 on the season.

“The one thing I’ve cautioned them about, is we need to still play without being overly confident because that can be deadly, but deep down, it can only help to have the confidence they have. I’m happy with where we are,” Kouns said.

The Spartans (4-3, 1-3 conf.) will play the second of a two-game set with conference rival Frederick this Thursday on the road.