Call them the terrific trio. 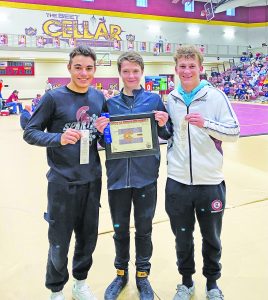 “Who wouldn’t be happy, we’re taking three to state in my first year here,” said a pleased Berthoud Head Coach Josh Galindo on Saturday. “I’m proud of those guys, they worked hard and it’s awesome we get to get our senior there, he’s worked hard all year and earning a spot as a senior is huge for him.”

Moneypenny, a junior, won first place in the Class 3A Region 2 championships at Brush High School this past weekend, winning all three bouts in the 145lb weight class after a first-round bye in dominating fashion. Moneypenny never saw the second period in any match; he spent a grand total of 176 seconds on the mat, winning with pins in 34, 55 and 86 seconds.

Squaring off against Jackson Tribbett of Eaton in the first-place bout, Moneypenny earned a quick two points on a takedown and took control, holding on despite Tribbett’s best efforts to work an escape. Moneypenny eventually got Tribbett flipped on his back and secured both shoulders to the mat to get the win, his second regional championship in as many seasons.

“It was just about staying focused on getting the job done,” said Moneypenny.

Galindo explained that for Moneypenny, his most accomplished wrestler who boasts a 26-4 record entering state, the plan is to keep adding moves to his repertoire in hopes of keeping upcoming opponents off-balance, and the same approach will apply this week for both Coble and Torres.

Torres, like Moneypenny, qualified for state last year in the shortened format that was employed as a result of a litany of pandemic-related restrictions, alterations and adjustments. This year, with the full field (16 wrestlers per weight class rather than last year’s eight) qualifying out of regionals for state, Torres said gave him a little less pressure entering the event.

“Last year it was just two to state and I had to prove myself and was the last seed so I really had to fight my way but here going into the third-place match I felt really confident I could win and get a spot at a state,” Torres said with his always genuine smile and positive demeanor, adding that going back to state “just feels so awesome.”

After enjoying a bye in the first round, Torres used his stamina advantage – gained from also competing as a cross-country and track athlete – to earn a 6-0 decision in his first match, scoring twice on takedowns in the first and second periods and later a reverse in the third to earn the win.

After suffering a 6-3 defeat to ultimate regional champion Casteus Combs in the semifinals, Torres won with a pair of pins, the first coming just eight seconds into the third period and then, in the third-place match, at 2:51.

“I watched his match before so I could learn what his weak points are and maybe try to get an idea of what he want to try against me, I saw he kind of dove in on single legs and I knew I had to watch out for that, and when he tried it with an arm bar and he could try to throw me on the mat, which he almost did, but I was able to bail out,” the now two-time state qualifier explained.

On Torres’ success over the weekend, Galindo explained they developed a game plan and Torres executed it very well. “We really concentrated on sharpening up Evan’s techniques, getting his shots closer together, but it was to compliment his endurance,” Galindo said. “We had to sharpen up his skill and that’s what we really concentrated on these last two weeks is cleaning up a few things and he responded great. His mat management out there was great this weekend, he was smart, he wasn’t giving up mistakes or bad points, if they were scoring on Evan they had to earn those points, Evan just didn’t give them to it by accident.”

For Coble, the lone senior on the Spartans squad, reaching the goal of earning a spot of state took on extra significance. An accomplished athlete who earned All-Conference honors on the football field this fall, placed in the top-10 in the 4-H National Shooting Sports Championships and signed his National Letter of Intent to compete as a sport shooter in college, the last thing remaining on the to-do list was get a spot at state wrestling.

“It feels good, I’m happy, the goal has always been to earn a spot at state,” Coble said after winning with a 15-0 technical fall against Austin Sisk-Metzger of host Brush in the third-place match. Coble sandwiched a pair of pins, the first in 2:47 and the second in 1:23 around a 6-3 defeat in the championship semifinals.

“Honestly I was scared with that first takedown how he shot, but I got my leg in there and felt confident in that and then I just went to work on him,” Coble said of the win that gave him the bronze medal and a spot in state.

Galindo by and large was happy with the results over the weekend, though, like any competitor had hoped to bring a few more grapplers to state. “It’s huge, we had three underclassmen place in the top-five, they battled all the way through,” Galindo said. “We barely missed our goal, we would have loved to have a few more so they can get that experience going to state but I’m happy, these guys worked their butts off and they earned it.”

The 2022 state championship wrestling meet will take place this Thursday through Saturday at Ball Arena (formerly Pepsi Center) in Denver.