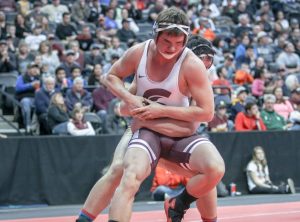 If ever anyone had any doubts about the unimaginable physical toll that six minutes of wrestling takes on the human body, they should have seen Berthoud High senior Chad Ellis after he won his second-straight state wrestling title at the Pepsi Center on Feb. 20.

Ellis, as impressive a physical specimen as exists, was collapsed on the mat in utter exhaustion inside the tunnel adjacent to the 3A mat after winning a 8-7 decision over Chayden Harris of Olathe High School in the championship bout in Class 3A’s 195-pound division.

Even at the third-heaviest weight class, Ellis’ explosiveness is unrivaled; he has the quickness of a wrestler 30 pounds lighter. It was Harris’ length and strength that gave Ellis difficulty in the championship match.

“I don’t think he was anywhere on the level of quickness but he was definitely stronger and he’s so much bigger, he probably had six inches on me, so just trying to get into his legs, through his arms and his huge torso, that was tough,” Ellis explained. “Physical ability I don’t think he was with me but he’s very good at what he does.”

Ellis made mincemeat of the 195-pound class at the state tournament, pinning Strasburg’s Skile Ames in 1:32, Lamar’s Bart Gruenloah in 1:19 and finally Valley’s Jake Hernandez in just 30 seconds to advance to the championship match with Harris.

Harris got a take-down for the first two points of the match but Ellis came back, scoring on an escape and a reverse to hold a 3-2 lead after the first two minutes. Ellis scored on a pair of escapes, taking control of the match with a 5-2 lead as both wrestlers began to show signs of tiring. Harris was able to get Ellis slightly off-balance and execute a take-down in the final seconds of the second period to cut Ellis’ lead to just one, 5-4 entering the third and final period.

Ellis explained that he knew he had to overcome both his exhaustion and some mental hurdles as he began the final two minutes of his wrestling career.

“Two periods into it I was gassed and for first time this year I started to doubt if I could win this match even though I was ahead, it was such a tough match,” Ellis said. “As a competitor you never want to lose but especially when you’re never going to step on a mat again you want to go out with a good note.”

Beginning the third period on top, Ellis did not let Harris out of his grasp and after a minute had gotten his opponent on his back, nearly getting the pin, and scoring two to take a 7-4 lead. 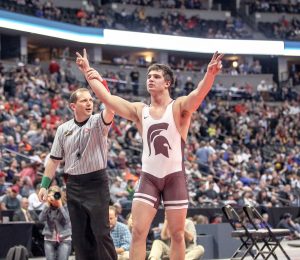 Chad Ellis celebrates his hard-fought victory in the 195-pound Class 3A wrestling championship at Pepsi Center in Denver on Feb. 20.
Karen Fate / The Surveyor

“When I put him on his back that was huge,” Ellis explained. “I just kept thinking no matter how tired I am he’s got to be even more tired because I have great guys in the room and there’s no one who can push him like they push me.”

Harris scored on a reverse with 50 seconds left but Ellis got an escape to remain in the lead. He never allowed Harris to get him under his control and held on for the final 20 seconds to claim his second-straight state title.

Ellis, who finished his senior year 33-2, will play football for Oklahoma Panhandle State University next fall. The senior explained that he took the day before his title bout to reflect on all the memories he made in his four years as a competitor at the state tournament.

“It was kind of cool because I had some time to reflect on the memories I made and all the friends I made and everything that you’ve won and all the stuff you’re not going to have anymore; it was a good send off.”

As a two-time state champion, Ellis joins only a handful of other wrestlers – including his head coach Scott Pickert and his teammate and friend Jimmy Fate – who have won multiple state titles for the Spartans. When informed of this, Ellis was visibly moved.

“Wow, that’s very cool to be compared to your coach. I think it’d be cool to come back someday and be able to look up at your name on the wall and know that you’re not the guy that says ‘I could have’ or ‘I should have’ but says ‘I did that.’ You get to show your kids things that they can accomplish and your friends all know what you did and that you’re not a fraud or anything. That’s just really going to be neat.”