For Austyn Binkly there was always one more match to win.

Binkly, a junior who reached the podium with sixth- and third-place finishes as a freshman and sophomore, respectively, left the state wrestling tournament both years feeling less than fully satisfied. He always felt there was one more match to win. 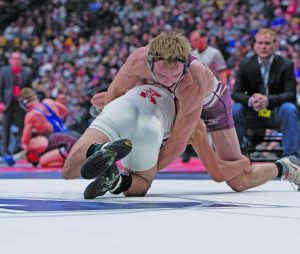 Last weekend at the Pepsi Center Binkly won that one more match and with it came membership in exclusive company – Colorado State Wrestling Champion. In Friday night’s semifinals Binkly defeated Rifle’s Colt Rohrig in a 3-1 decision and the following night got the best of a familiar foe, Eaton’s Ariel Rodriguez, winning 8-4 to take the state championship in 3As 138-pound class.

“That’s what I’ve always trained for is one more match, I’ve always been one match away from my goal,” Binkly said after the title bout, as he caught his breath and worked to grapple, no pun intended, with what he had just accomplished. “All those extra workouts, all that extra time, it’s something that paid off.”

Binkly strode through the pre-match parade of champions, an annual tradition on title night at the state tourney, sporting a suit and tie and carrying a briefcase. “Out of all the kids to pull off a stunt like that, Austyn is definitely the one, and it fits his personality perfectly,” said Berthoud Head Coach Will Carron, when asked about Binkly’s wardrobe selection.

Yet once the championship bout began, Binkly was all business. The junior jumped ahead quickly, scoring two points on a take-down by wrestling aggressively from the onset, something he explained was a priority after his win over Rohrig in the semis where he admittedly was “a little tentative.”

Up two-zip after the first period, Binkly kept at it in the second by hitting another take-down and scoring again on an escape. When things got tight in the third and final period, Rodriguez got two on a take-down of his own to narrow the match to 5-4, Binkly stayed true to form, scoring on another take-down and final escape to take the bout with an 8-4 decision.

Wrestling Rodriguez for the third time of the year, something Binkly admitted he “hates” because, “You just get a feel for each other … he knew the fakes were coming and he wasn’t moving the way I wanted him to move,” he kept his mind on the task at hand but, more so, his motivation for it.

“I’ve been working out every morning at like 4 a.m. and again after practice and just thinking about my mom and at that moment pointing at her and seeing the tears in her eyes, that’s the only thing that got me through those workouts. I wanted to give it to my fan base, and I think Berthoud needed a little light right now, so that’s what I was thinking about. I had to get it, it’s bigger than me,” an emotional and reflective Binkly said. “I have the best fan base out of just about any high schooler. I have probably 80 students upstairs right now that were cheering for me.”

It’s a sport that requires it more than perhaps any other. Carron credits Binkly’s mental strength, saying, “He has the attitude, he has the attitude of calmness, he’s clam in any situation no matter what it is. Austyn has put in a lot of hard work to make that championship possible, it’s an awesome feeling and I couldn’t be more proud of an individual.”

In taking home the gold medal, Binkly was one of five Spartans, out of seven state qualifiers, to take a place on the podium. The strong showing put Berthoud in fourth place in overall team scoring with 94 points, behind only Alamosa (164), Eaton (145) and Lamar (100). 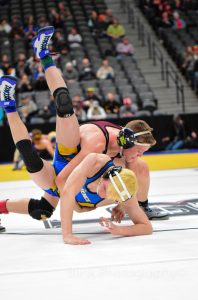 Freshman Kolten Strait took second in the 113s, dropping a 6-2 decision to Isaiah Gamez of La Junta in the championship match. Strait, who had won three straight decisions – 2-0, 4-3 and 5-0 to advance to the championship match – was the recipient of effusive praise from Carron who said, “Kolten Strait has wrestled, by far, his best tournament this year when it counted most. He beat the number six, five and three kid in his bracket, which says a lot for a freshman coming in here.”

Dalton Williams, a sophomore competing in 106s, placed third for Berthoud by pinning Zach Dooley of Woodland Park High School in just 1:00 in the third-place bout while seniors Wyatt Larson (170) and Brock Johnson (195) placed fourth and sixth, respectively, and did so after battling back from injuries.

“Wyatt is the heart and soul of our team, he is a tremendous leader, if there was one kid to battle through an injury it would be Wyatt. He is the toughest kid on our team, mentally and physically,” Carron said of Larson.

Asked about Johnson’s sixth-place finish, Carron said, “For Brock to come back after a two-tear ACL injury and just come down and qualify is amazing, let alone place. He battled the entire time. It was impressive for him to come off an injury of that magnitude and do what he did.”

Overall, Carron was pleased with the season, his first as the Spartan’s head coach, but sees it as just the first step. “It’s a building block. We’re starting to set the foundation for what we hope is going to be a great program. At the beginning of the year they didn’t have Berthoud in the top-15, and we’re finishing fourth tonight. That’s an amazing accomplishment in itself right there, but it’s not enough, it’s something to build on.”

Binkly will be a big block in building the foundation Carron envisions and, given that he is a junior, will have the opportunity next season to join just four other Spartans – Chad Ellis, Jimmy Fate, Dave Fogg and his former coach, Scott Pickert – as winners of multiple state wrestling championships.

“The one thing I will tell him,” Carron said, “is the second one is even harder.”

Binkly appears poised for the challenge, saying after his title bout, the defense of his state championship “starts now. It starts tomorrow. I have to keep working hard to do that, you know, I want that.”