Six Spartan grapplers – Dalton Williams (106 pounds), L.T. Torres (113), Miguel Sarmiento (120), Austyn Binkly (132), Matt Bailey (138) and Wyatt Larson (170) represented Berthoud at the state tournament in February. Bailey, a senior and four-time state qualifier, closed out his high school wrestling career with a strong fifth-place finish at state, while Binkley, just a sophomore, took the podium for the second time in as many years by winning his third-place bout. Binkly entered state with a 43-9 record but lost in the championship quarterfinals to ultimate state champion Kyle Cisneros. Binkly advanced to the bronze medal where he bested Dylan Yancey of Platte Valley with a 5-4 overtime decision to take third, the best showing by a Spartan at the state tourney. 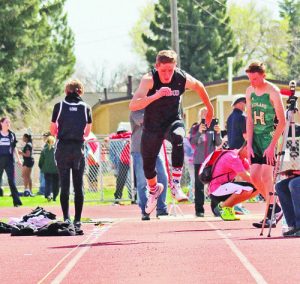 Photo by Tiffany Rafferty – Brock Voth broke a 45-year-old BHS record in the triple jump at the Randall Hess Invitational in Johnstown April 22.

Brock Voth hopped, skipped and jumped his way into Berthoud High School (BHS) history last spring as the then-junior broke the school record in the triple jump at the Randall Hess Invitational in Johnstown. Voth’s jump of 43-3 broke the BHS record of 43-1 that stood since 1972. Voth had been working for this jump since the winter off-season practices began. He has been in the weight room, running, and doing drills to prepare for this track season, and now he will be able to see his name hanging on the wall of the BHS gym. With his record-breaking jump, Voth won the event at Randall Hess and would go on to place 15th in the state meet in late May.

Liam Gately, now attending prestigious Northwestern University in Illinois, took home his third and fourth state championships at the 4A state swimming meet at the Air Force Academy Natatorium last spring. Gately, twice a gold medalist in the 500-yard freestyle as a sophomore and junior, took first place in both the 100- and 200-yard freestyle races at the 2017 state meet and garnered All-American honors. The four state championships he won over the course of his high school career are the most ever, in any sport, for a BHS student-athlete. Gately’s times in the two sprints at state, 44.64 in the 100 and 1:36.94 in the 200, were not only the fastest times in any classification in Colorado but also broke the standing 4A state records. Gately was named the 2016-17 Berthoud Weekly Surveyor Male Athlete of the Year. 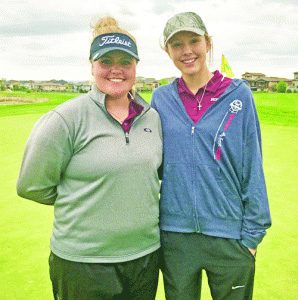 Photo by Dan Karpiel –  Molli Boruff, left, and Kyra McDonald. Boruff shot back-to-back 84s at the 3A state golf tournament, the best showing in her school-record three trips to state.

The 3A state golf tournament, held this season at the Broadlands Golf Course in Broomfield, was the last event in which any BHS team competed in the 2016-17 school year, and Berthoud saved the best for last. The Lady Spartans team of Molli Boruff, Shannyn McEntee, Kyra McDonald and Emma Garner posted a team score of 558 in the 36-hole event that was good enough for fifth place, the best showing at state in the program’s history. Boruff shot back-to-back 84s in the two-day affair, the best showing in her school-record three trips to state. McDonald shot a 90 and 91 in her two rounds to tie for 17th place, while McEntee, after shooting 115 in the first round, finished out her high school golf career in style, improving by 14 strokes to card a 101 on Tuesday.

Samantha Mulder was the only athlete to qualify for the state track meet in an individual running event. In April Mulder hit a hurdle and fell in a race and had worked through the injury all season long. At the state meet at Jeffco Stadium, Mulder was rewarded for her perseverance, as she ran a personal-best time of 16.12 in the 100 hurdles, taking the podium with a sixth-place finish. The boys 4×100- and 4×200-meter relay teams, both comprised identically with Jake Rafferty, Ryan Schmad, Brock Voth and Miguel Sarmiento, earned medals in both relay races at state track. In the 4×200 race the quartet turned in a time of 1:31.99 to take fifth place, while in the 4×100 race they posted a time of 44.17 to take fourth place.

A pair of Berthoud’s most successful and longest-tenured head coaches announced their retirements early in the calendar year. Girls basketball head coach, Randy Earl, who tallied well over 300 career wins, 226 of which came in Berthoud, and took the Lady Spartans to the postseason in 13 of his 14 years at the helm, decided not to return for a 15th season.

Wrestling coach, Scott Pickert, a fixture of the BHS program since his days as two-time state champion, also decided to retire. Pickert, an inaugural inductee in the Berthoud Sports Hall of Fame, coached for more than two decades and was on the mat for nine state titles.

In their steads, Pickert was replaced by longtime assistant Will Carron. Earl, coincidentally, was replaced by the man he succeeded in Alan Gibson, while Mil Santos, head coach of the 2001 state champion volleyball team and a long-time assistant to Agho, replaced her on the volleyball squad. All three new coaches work hand in hand with Berthoud’s new Assistant Principal/Athletic Director Brian Barringer, who took over last summer for Pete Scheck, who moved on to Longmont High School.

Both boys and girls cross country teams qualify for state 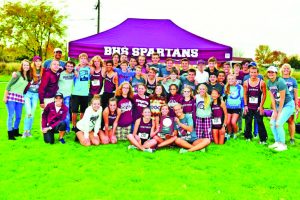 Photo by Dan Karpiel – Both the boys and fi rls cross country teams qualifi ed to compete at state a feat that hadn’t been accomplished since 1984. The boys fi nished 18th while the girls were 20th.

It had been 34 years since BHS has sent both a full boys and a full girls team to the Colorado State Cross Country Meet. Only four times in the history of the school (1978, 1979, 1984 and 2017) has Berthoud been represented like they were on Saturday, Oct. 28, at the Norris Penrose Event Center in Colorado Springs. The Berthoud boys team finished 18th in team scoring, with Kade Leonard’s time of 18:01 pacing the team and earning the junior 72nd place, while Noah Burtis finished in 97th place in 18:17, achieving his goal of a top-100 finish. On the girls side, senior Cailey Archer led the Lady Spartans squad from the very beginning. She ran almost eight-and-a-half minutes faster than the yea, prior placing 88th with a time of 21:35. Senior Maycee White crossed the finish line in 107th place with a time of 22:1,3 and the Berthoud girls took 20th place in team scoring. 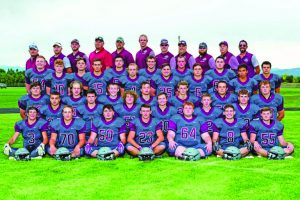 The BHS football team bounced back in a big way in the fall of 2017. The Spartans, coming off a 2016 season that saw the team finish in next-to-last place in their conference with a 2-8 overall record, looked like an entirely new team in 2017. The Spartans, led by Head Coach Troy Diffendaffer, who was selected as Tri Valley Conference (TVC) Coach of the Year, dominated their non-conference competition to begin the season 5-0. The TVC schedule proved brutal with four of the six teams, Berthoud being one of them, qualifying for the 16-team state playoffs. Berthoud battled hard but were over-matched in their opening round at state, losing to No. 2-seed and eventual state champion Palmer Ridge by a 48-13 final score. Defensive lineman C.J. Balliet, wide receiver and kicker/punter Ryan Schmad, linebacker Anthony Trojan, quarterback Brock Voth and cornerback Jake Yuska all received All Conference honors for the Spartans.

At three different ceremonies, one in April, another in June, and a third in November, a sum total of nine BHS athletes signed national letters of intent to continue their athletic careers at the collegiate level. In April, just a month before each graduated, Joshua Archer committed to play baseball at Belmont University in Tennessee, Jessa Megenhardt, selected as the Berthoud Surveyor Female Athlete of the Year for the 2016-17 school year, committed to play volleyball at Seattle University, but over the summer opted to transfer to Metropolitan State University in Denver, and Josh Schumacher committed to Knox College in Illinois for golf. In June, Kyleigh Milan committed to play basketball for Laramie County Community College (LCCC) in Cheyenne, Wyo.