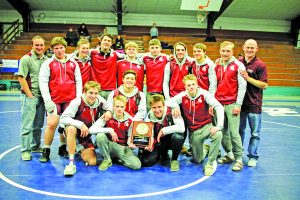 Up until last weekend everything was just practice. That’s the approach taken by the Berthoud High School (BHS) wrestling team – final results do not count until regionals. And, now that it does matter, the Spartans shined.

Berthoud won the class 3A region 2 championship on Saturday evening at Platte Valley High School in Kersey. Berthoud finished with 200 team points, just ahead of Sterling’s 198 to that the regional crown. Even better, the Spartans will be sending eight wrestlers to the state tournament at Pepsi Center in Denver this weekend.

“One thing that we really preach is all of those matches all season long, they’re just exhibition matches. That’s all they really truly are is exhibition matches, just another practice. Until our final meets, the regional and state tournaments, they’re all just another dual for us,” Berthoud coach, Will Carron, said. “I’m really pleased with what the guys did, couldn’t be more proud of them, but we have one more weekend to go.”

Carron added his plans are for as tough of a regular season schedule as he can get to assure that by the time the playoff tournaments come around this time of year his team has faced the best and is thus the best prepared to win when it counts. “We put a tough schedule in line for our kids. Our main goal is want the regional tournament and the state tournaments to one of our easier tournaments for the year. When it comes down to show-up time, our kids are seasoned and ready for those tough matches,” Carron said.

For Binkly, who is seeking his second championship after winning last year in the 138-pound class, this is nothing new. Now competing at 145s, this will be Binkly’s fourth year at state and in each of the previous three he medaled. The senior is supremely confident after winning regionals in dominating fashion. Binkly pinned his first three opponents in 2:40, 0:49 and 4:34 before handily defeating Joe Jordan of Bennett High School by an 11-6 decision to win his second regional title in as many years.

“I still think I’m just physically better than everyone in my weight class right now. It really showed and just exemplified it (at regionals),” Binkly said. Now seeking to join some elite company as a two-time champion for BHS, Binkly said he is fully aware of the gravity of what he is about to attempt to accomplish. “I didn’t sleep at all last night thinking about it. I was dreaming about it over and over and I kept waking up. State is 14 years of work. It’s what every kid dreams about.”

Berthoud’s other regional champion, Colton Williams, will be making his first trip to the state tournament but said he is not nervous and is feeling the best he’s felt this year and is comfortable in the 120 weight class. Williams won the title bout at Platte Valley in convincing fashion, a 7-0 decision, over top-seeded Daniel Matthews of Valley.

“I do feel pretty good right now as I’m wrestling. I think it’s just we’re doing stuff right right now. I’m feeling pretty good at the weight I’m at right now,” Williams explained, and said with just a few days to prepare for state it’s just going to be about focusing and preparing mentally. “I think I just need to get mentally ready, have just a few practices. I guess that’s all you can do.”

Dalton Williams (113) and Torres (126) each wrestled in their weight classes championship matches at regionals, putting forth tremendous effort but coming up just short. Williams lost a 16-4 major decision that was not as lopsided a match as the score indicated, and Torres fell by a razor-thin 3-0 mark in the title bout. Massie, Conlon and Johnson all won their third-place bouts at regionals to qualify, while Leypoldt dropped his, but will still qualify as a top-four finisher.

“I saw everyone competing at the level they knew they could compete at. We’ve been plagued with injuries, with sickness, all season long,” Carron said. “To finally have the whole team there, it showed with all of our kids, they were all on the edge of the mat and it was a cool thing to witness our whole team come together and rally together with everyone there.”

The Colorado state wrestling tournament will be held Feb. 21 through 23 at Pepsi Center in Denver.