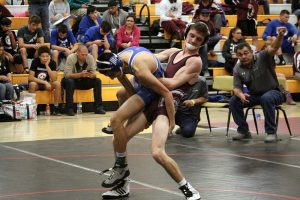 The Pueblo East Invitational saw a pair of Berthoud High wrestlers take home individual titles on Dec. 12 while another seven ended up on the podium. As a team the Spartans took second place in the tournament with 177 team points, handily out-scoring Discovery Canyon (141.5) but a ways behind team champion Pueblo County, who finished with 219.

Seniors Jimmy Fate (160lbs) and Chad Ellis (195lbs), both defending state champions, took first place. Ellis won by an 8-6 sudden victory over Trent Schultz of Mountain Vista, remaining undefeated on the season. Fate, who also remains unbeaten on the year as he aims for his third-straight state title, won his first-place bout by pinning Danyon Minck of La Junta in just 54 seconds. Fate has not lost a bout since his sophomore season.

Junior Matt Bailey, wrestling in the 132lb weights, won on a technical fall to take the third-place medal, while his brother Kyler Bailey, a senior, also won third by 9-1 decision over Jonnathon Quijada of Aurora Central. The wins improve both wrestlers’ records to 9-1 on the season. Senior Ben Poirier (152lbs) took third place as well with a 3-1 sudden victory over Luke White of Cheyenne Mountain.

Another trio of Spartans won fourth place in the tournament. Freshman Austyn Binkley (120lbs) lost his first bout of the season by rule to Jaden Porreco of Discovery Canyon. Connor Balliet (220lbs) and Jared Henning (285lbs) also lost in the third-place bouts by rule but still ended up on the podium. Wyatt Larson improved to 5-3 on the young season by winning his fifth-place bout by rule over Aurora Central’s Keshon White in the 170lb class.

The Spartans will host rival Windsor for a dual at Berthoud High at 6 p.m. on Dec. 17. The Northern Colorado Christmas Tournament, which will be the Spartans last competition before a nearly three-week break for the holidays, will take place Dec. 18 and 19 at the Budweiser Event Center in Loveland. The four team points available at that tournament are the most of the season; the tourney is one of the largest and most competitive in the state.