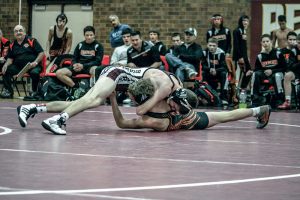 Berthoud’s Colin Leypoldt gets the upper hand against his opponent during the dual vs. Erie on Jan. 21. Leypolt ultimately lost his bout but his team dominated Erie 60-16 at Berthoud High School.
Karen Fate / The Surveyor

Just over three weeks away from the annual state tournament the Berthoud High School (BHS) wrestling team continues to march through their competition. The Spartans won decisively, 60-16, on Jan. 21 in a dual with Erie at BHS.

Spartans Head Coach Scott Pickert was pleased with the results but did say he saw some things he wants his team to work on during practice.

“Overall pretty well tonight,” Pickert said. “Erie did a pretty nice job getting hand control tonight and staying on the tight waist breaking hips, so we know we have a few things we have to work on, but overall it was a good night.”

Top-ranked senior Ellis started things off strongly for the Spartans in the 195 class. Ellis attacked Erie’s Riley Melton and quickly scored five points before getting the pin just over 30 seconds into the bout.

“You just kind of have to go out and do your own thing and just have the expectation to get someone down in 30 seconds, and if it goes longer it goes longer,” the defending state champion explained after his bout. “I know what I do, and against most people I can get that to fit in pretty well. I don’t really have anything like a game plan for certain guys.”

With freshman Brock Johnson out with an ankle injury in the 145-pound class, Pickert opted to bring Fishburn up from the JV squad and was impressed with what he saw. Fishburn wrestled well, twice getting his opponent – Wyatt Unruh – into a cradle position only to see him slip out. Fishburn, remaining relentless, however, got the fall with 21 seconds remaining in the first period.

“At first I just tried my hardest to get him down. I had him in a cradle but my cradle wasn’t very tight, and I guess I wasn’t in the right positioning and he slipped out of my cradle,” Fishburn explained of his first varsity bout. “But after he got on top he worked his arm around and put me into a perfect position for Grandby straight into a Peterson.”

Pickert was equally pleased, saying, “Calvin is an incredibly strong young man, he works really hard in practice, and I see his confidence really growing. Calvin has some fine skills, hit a beautiful Grandby and right to the finish position and pinned that kid. He jumped in to the lineup and I love to have guys like that.”

Berthoud, who as a team are ranked third in the Class 3A, will host Mead for a dual in the BHS gym on Jan. 28 at 6 p.m. The Spartans travel to Gilcrest to wrestle in the Viking Invitational Tourney hosted by Valley High School on Jan. 30.