In 1912 nearly all of Berthoud’s businesses were owned by men. For that reason, many young women in the community faced the choice of finding a husband or entering the workforce as a store clerk or teacher before getting married.

In Nov. 1912 a group of Berthoud’s “working girls” met at W.H. and Anna McCormick’s house for a picnic dinner. The McCormick house (still standing) was located at the northwest corner of the intersection of 5th Street and Massachusetts Avenue. The photograph that accompanies this article shows these girls assembled in the house with friends and two married women. The local newspaper seldom reported on such events but the notation on the back of the snapshot identified each of the 15 women in attendance. 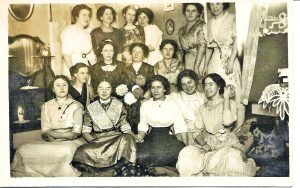 It may be assumed that Anna McCormick, owner of the house along with her husband and the hostess dinner, took the snapshot of Berthoud’s working girls in Nov. 1912. Her nieces, Blanche and Ruth Brunner appeared in the photo along with her sister-in-law Mrs. Carrie McCormick.

In 1912 Frank R. Shyrock, the owner and operator of Shyrock Hardware, was the owner of a Stanley Steamer automobile.

It is likely that Lynetta Foresman (a milliner), Myrtle Haworth, Bernice Quere, Virgie Smith Bernice Turner and Marion Hall also held jobs in downtown Berthoud but the locations of their employment are presently unknown.

A few years after the photo of Berthoud’s working girls was taken, most had married and given up their jobs as clerks and bookkeepers.

The most notable exception was Lucinda Gosney who in 1930 became a partner in the ownership of the Berthoud Bulletin. Miss Gosney never married and stayed active with the operation of the newspaper until 1938 when the tabloid was sold to Raymond Welch.

Mrs. Carrie McCormick appeared in the back row of women assembled for the photograph. She was married to Ed McCormick, son of Berthoud general store owner W.H. McCormick, in 1908. Later she went on to become an ordained minister and establish several Spanish-speaking congregations of the Four-Square church across northern Colorado.