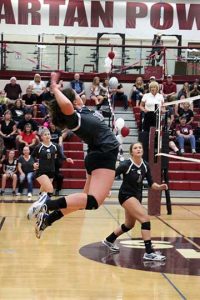 Kailey Berry goes up for a kill versus Windsor. Berry had a great game and had several kills that helped the Spartans sweep the Wizards.
Paula Megenhardt / The Surveyor

Something Berthoud Head Coach Daisha Agho has been preaching to her team over the last two weeks – after Berthoud lost a home match to Mead – has been taking their opponents seriously, regardless of whether the team on the other side of the net is a bottom-feeder or the reigning state champs.

“We’ve talked about a mentality, respecting the teams we go up against enough to play up to the best of our abilities and not just expect a team to roll over and let us win,” Agho said.

Even though there was little likelihood the Lady Spartans were going to look past long-time nemesis Windsor, Agho’s message appears to have been taken to heart by BHS. Berthoud came out firing on all cylinders Tuesday night, winning the first set going away, 25-6. The Lady Spartans did not allow Windsor to assemble even one scoring rally; all six of the visitor’s points came one at a time. Berthoud, meanwhile, strung-together rallies of three (twice), six, seven and four points.

Windsor rebounded from the blowout and, in the second set, was able to maintain a three- to six-point lead by using their block effectively and scoring against the right side of the Berthoud defense. The Lady Spartans adjusted by stacking their outside hitters, a move that appeared to confuse the Windsor defense and afforded Berthoud the opportunity to claw their way back.

With Julie Ward serving, Berthoud assembled a three-point rally that cut Windsor’s lead to 20-18. After a pair of side outs, a kill from Ward and another from Jessa Megenhardt knotted the score at 21-all. A kill from Casady Berry, a block from Megenhardt and Shay Pierick and a final kill from Megenhardt gave Berthoud the 25-23 win.

Sophomore Kailey Berry and freshman Sophie Kathol continue to shine for Berthoud; the pair tied for the team lead with eight kills apiece. Freshman Trinity Penny paced the Lady Spartans with five aces on the night, including back-to-backs that won the third set and extended Berthoud’s winning streak to nine straight. Pierick recorded a team-high five blocks while Megenhardt led Berthoud in both digs (16) and assists (29).

“For the most part I feel like tonight we did a really nice job of being able to move the ball around,” Agho said. “Our serve-receive looked much better, defense was on point, we were right where we needed to be every time … that was a big deal.

Pierick served up a season-high six aces while Ward tallied 12 kills on just 18 attempts as Berthoud made quick work of the Lady Warriors. BHS was in command of the match from beginning to end, never allowing Frederick to string together long scoring rallies as the visitors cruised to the three-set sweep.

“Ever since the Mead game I think they’ve done a much better job of coming out strong every night, showing their A-game,” said Agho.

Berthoud (9-3, 6-1 conf.) finds themselves in a three-way tie with Mead and Holy Family for first place in the TVC. The Lady Spartans welcome aforementioned Holy Family to the BHS gym for their next game on Oct. 4.