Beginning the season in such strong fashion pleased Berthoud Head Coach Mil Santos, who said after the match with Thompson Valley, “It’s hard to beat any team 3-0, to sweep them, so it was a good bonus for us because I think it’s been a while since we’ve done that. The big focus for us has been on fundamentals at practice and defense … we’ve focused on that and we did that last Thursday and we did it tonight.”

Berthoud took control of the match with Thompson Valley early and never looked back. A kill from senior outside Kailey Berry gave the Lady Spartans a 3-2 lead from which they would never look back. Subsequent aces from Teagan Holmes, Trinity Penny and freshman Allison Waller, and kills from Cas Berry and Sophie Kathol saw Berthoud double-up on the scoreboard, 14-7. 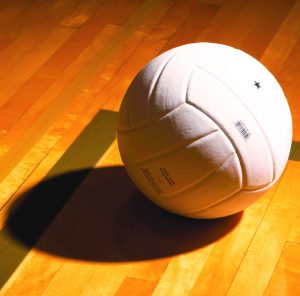 Berthoud rallied off nine-straight points with Cas serving, two coming via the ace, and Berthoud held a commanding 23-8 lead. The Lady Eagles tried to claw their way back, but a block from Kailey Berry put an end to that, as Berthoud took the first set convincingly, 25-11.

Berthoud’s core group of Penny, Kathol, Holmes, and the Berry sisters have now a three-year history of playing together at the varsity level. Santos explained the experience is invaluable, saying, “We have a very young team, but very experienced, with those kids returning from last year, they’re still juniors, so that’s probably one of the biggest and most positive things we have right now is that they have so much experience.”

Berthoud’s dominance continued the second set. Berthoud jumped out quickly to an 11-point lead with Cas and Calli Taylor serving, Thompson Valley’s only point coming on a Berthoud attack that went out of bounds. Another six-straight points from Berthoud took whatever wind the Lady Eagles had left in their sales as the home team cruised to the 25-8 win.

Communication and fundamentals have been a focus of the team throughout the preseason and first two matches, according to Santos, and the team is beginning to get well acquainted with the 6-2 rotation.

As Cas explained of the team’s use of the 6-2, “That works so well for us because when I’m in the front row I’m able to attack and Trinity (Penny), as a setter, she’s amazing, and I think that both of us have different leadership skills, but they work well together, so that’s why it’s been so positive from us.”

Berthoud took their foot off the gas in the opening portion of the third set, allowing Thompson Valley to keep things close. The Lady Eagles actually led at one point, 8-6, before Berthoud re-took control. Aces from Cas, Holmes, and Taylor and kills from Kailey and Taylor Willet pushed Berthoud in front, 24-15. Thompson Valley’s return of a serve from Penny went out of bounds to give the Lady Spartans the 25th and final point of the match.

Asked of the importance of beginning the season 2-0, Cas replied, “I think it’s really important for us because right now we have a lot of energy and now that we’re 2-0 that will help continue that positive energy throughout the team. As a team, we have learned that positive energy gets us through a lot.”

Berthoud will travel down to the Gold Crown Field House in Lakewood for the Regis Tournament this Friday and Saturday.