On August 1, 2018, at approximately 11:30 a.m., the Larimer County Sheriff’s Office received reports of a motor vehicle crash at the intersection of US Highway 287 and Berthoud Parkway in Berthoud. Deputies, Colorado State Patrol, Berthoud Fire Department and Thompson Valley EMS responded to the crash. It was determined that a 2007 Chevrolet van was northbound (traveling east) on US Highway 287 when it collided with a bicycle that was southbound on Berthoud Parkway. The driver of the van was an adult male from Longmont and was not injured. A passenger in the van was an adult female from Longmont who also was not injured. 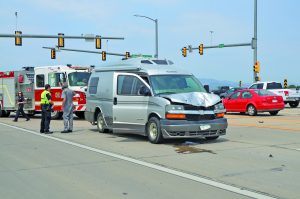 The bicyclist was a 13-year-old male from Berthoud who was transported to a local hospital with serious injuries. The bicyclist remains in the hospital in critical but stable condition at the time of this release.

The Larimer County Sheriff’s Office CRASH (Collision Reconstruction and Scene Handling) team responded to investigate and with the assistance of Colorado Department of Transportation had northbound US Highway 287 closed for about four and half hours. The investigation is ongoing and no further information will be released at this time.

If you witnessed the crash and have not already spoken to a deputy, please call Corporal Steve Wicker at 970-498-5532.