Berthoud teen hit by van on bicycle in fair condition 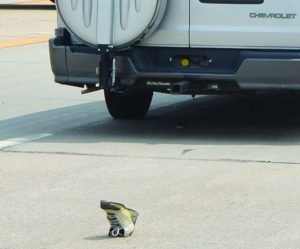 Photo by Becky Hemmann – A shoe flung from Dakota Haas as he was struck by a vehivle traveling 55 mph lays behind the can involved in the incident on Wed. Aug 1.

Berthoud resident Dakota Haas, the-13-year old who was struck by a van traveling 55 mph while riding his bicycle at the intersection of US Highway 287 and Berthoud Parkway on Wednesday, Aug. 1, is listed in fair condition at Children’s Hospital in Aurora, Colo.

The 2007 Chevrolet conversion van that struck Haas was northbound on Highway 287 when it collided with the bicycle the teen was riding southbound on Berthoud Parkway last Wednesday.  Haas was listed in critical condition and spent five days in an intensive care unit (ICU) first at UCHealth Medical Center of the Rockies in Loveland before being transferred to Children’s Hospital in Aurora, where he was moved out of ICU on Monday.

According to information provided by his mother, Susan Kaczmarek, in a post on a GoFundMe page set up to help with mounting medical expenses, her son has  multiple broken bones, a fractured skull, and swelling in his brain due to a blood clot. The most recent update states, “They moved him out of the ICU, thank God. We are still looking to a long recovery here in the hospital of at least a month or more. My son is alive, that’s what counts.”

The driver of the van, a man from Longmont, and a female passenger, has not been named. No charges have been made against the driver at this time. According to the Larimer County Sheriff’s Office’s public information officer, David Moore, investigators are waiting to receive toxicology results for the driver.

The accident was investigated by the LCS Office’s Collision Reconstruction and Scene Handling (CRASH) team, assisted by the Colorado Department of Transportation. Northbound traffic on US Highway 287 closed for four-and-a-half hours following the incident.

To send messages to the family or give to the fundraising effort visit, gofundme.com/4r72sd-please-help-my-son.