Berthoud teacher arrested for sexual assault of a child 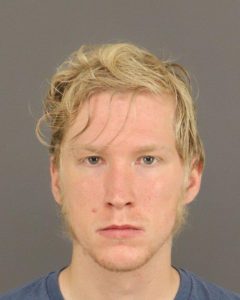 On June 9, 2021, the Larimer County Sheriff’s Office received a Safe2Tell report alleging an inappropriate sexual relationship between a teacher and student at Turner Middle School in Berthoud. Further investigation revealed the teacher is Kyle Alexander Faust (03/04/1997) of Thornton and the victim is a 13-year-old girl. The alleged crimes began in March of this year and occurred both at and away from the school.
Investigators executed a search and arrest warrant today and Faust was taken into custody without incident at his Thornton residence. He was booked into the Adams County Jail on the following allegations: Enticement of a Child (class 4 felony) Sexual Assault of a Child by One in Position of Trust (class 3 felony) Internet Sexual Exploitation of a Child (class 4 felony) Internet Luring of a Child (class 5 felony)
Anyone with information about this incident or any other incident involving Faust is asked to call LCSO Investigator Kevin Hobson at 970-498-5162. You may also call Crime Stoppers at 970-221-6868 where you will remain anonymous.