In two meets last week, Berthoud suffered their first defeat of the season, losing to Niwot 117-67 in team scoring but rebounded three days later to get a 95-90 win over rival Thompson Valley. More importantly, the Lady Spartans saw their best times of the year in nine of the 12 events as the team continues to improve from top to bottom in the run up to the conference championships. 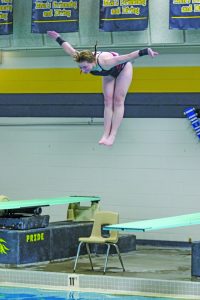 Photo by Angie Purdy – Berthoud’s Abigail Wiggins competing in the 1-meter diving event last week at the Dick Hewson Aquatics Center in Loveland. Wiggins took first place in the diving event in Berthoud’s meet against Niwot with a total score of 335.40.

Sophomore Abigail Wiggins took first place in the one-meter diving event against Niwot, scoring 335.40 points, her best score of the season to mark one of the Lady Spartans’ four event wins on the afternoon. Berthoud also picked up two victories by senior superstar Jamie Dellwardt, who won both the 100-yard backstroke (0:58.32) and 200-yard freestyle (1:57.33), the times in both races marking Dellwardt’s fastest finishes of the season. The senior, who did not participate in Saturday’s meet against Thompson Valley, now has 10 first place finishes in the three meets in which she has competed this season, a stellar achievement even by her very high standards.

BHS senior Abby Dodd notched another win for Berthoud in the Niwot meet, taking first-place in the 500-yard freestyle endurance race. Dodd’s time of 6:07.23 was her fastest time of the season, and more than 40 seconds ahead of fourth-place Riley Justice of Niwot; Berthoud’s Avery Anderson (6:14.54) and Natalie Major (6:28.50) took second and third, respectively. Dodd also won first place in both the 200- and 500-yard freestyle faces against Thompson Valley, her time of 2:11.24 in the 200 free marking her season best.

Berthoud found themselves on the top of the podium more frequently against Thompson Valley, winning eight of the 12 events contested. Against Thompson Valley, with whom Berthoud shares a home pool, it was junior Marin Kasperbauer winning twice, taking first in the 100-yard freestyle with a time of 1:00.61 but just 0.21 seconds. Kasperbauer also won the 100-yard breaststroke event, (1:18.06) where she edged out Alexis Dickerson (1:18.44) but a slim margin. The time in the breaststroke being Kasperbauer’s best time of the year.

Senior Kysa Keck also took first place two of her signature events, winning the 50-yard freestyle sprint race in just 26.76 and the 100-yard butterfly in 1:05.61, both times marking her best of the season and setting the senior up for a strong showing at conference. Berthoud also picked up victories from Kelly Conlon in the 200-yard individual medley race with a time of 2:46.54 and in the 400-yard freestyle relay (4:12.04).