Spartans eye No. 10 Mavericks this Friday 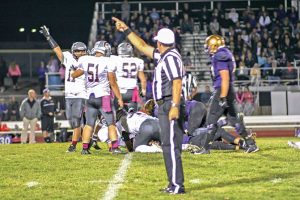 Berthoud junior Karsten Bump recovers a fumble with help from sophomore Ryan Schmad (81) during the game vs. Holy Family in Broomfield on Oct. 9. Celebrating with Bump and Schmad are seniors John Koclanes (11) and Jamie Gray (51) and Stephen Lockard (52).
Jan Dowker / The Surveyor

In the game of football, it’s amazing what can happen in such a short period of time.

In less than two minutes of game time, one-minute, 45 seconds to be exact, the Berthoud High football team went from trailing the No. 6 ranked Holy Family Tigers by just six points to trailing them by 22. The drastic and ultra-rapid swing in the score was too much for the Spartans to overcome as they suffered their first loss of the season, 56-14, playing at the Mike G. Gabriel Football Stadium on Holy Family’s campus in Broomfield.

After some initial struggles offensively – a pair of three-and-outs and an interception – on their first three possessions, Berthoud assembled a 71-yard scoring drive that took 4:24 off the clock and was culminated by a five-yard touchdown run from tailback Karsten Bump. The score cut Holy Family’s lead to just 12-7 with 6:17 left in the first half.

Berthoud answered another Holy Family touchdown with one of their own. Spartan cornerback Max Bump intercepted a Chris Helbig pass that set the Spartans up at the Holy Family 10-yard line. On third and goal from the one, Berthoud quarterback Cody Braesch, on his second effort, crossed the goal line to put Berthoud down just six, 20-14, with 48 seconds remaining before halftime.

Despite having cut into Holy Family’s lead and getting real momentum for the first time in the game, a couple lapses in the Berthoud defense proved costly and allowed Tiger receivers to get behind the coverage where Helbig’s cannon of a right arm took advantage. In just 42 seconds, Holy Family drove the length of the field, scoring on a Helbig to Bryce Buderus pass as the clock hit triple-zero, giving the Tigers a 28-14 lead.

“It’s tough when you have a quarterback like that that runs around all over the place, the DBs start looking at the eye candy of him running around back there and their receivers do a good job of working behind or working back to him and when we’re not paying attention to the guys he’s throwing to, he’s able to sneak one back behind us,” Berthoud Head Coach Troy Diffendaffer explained after the game.

Berthoud emerged from the locker room determined to answer the late first half Tiger touchdown. Yet on their second play from scrimmage in the third quarter, Tiger defensive back Joe Golter intercepted a Braesch pass and on first down Holy Family running back Michael Zeman broke through the Spartans’ defense for a 19-yard score. After the two-point conversion was successful, Holy Family held a commanding 36-14 lead.

“We thought we had a lot of momentum going into halftime there and even giving up that one late we still felt pretty good because we were moving the ball on them,” Diffendaffer said after the game. “But then you come out there in the second half and we don’t execute on our first drive…it took the air out of our sails.”

After seizing the momentum, it was game-on for the high-powered Holy Family offense. The Tigers scored on three of their next four possessions, putting the game well out of reach for the Spartans.

Rather than going after Helbig by blitzing like previous opponents had tried and failed to do, Diffendaffer and his staff opted to sit back and force the 6-foot, 5-inch quarterback to beat Berthoud’s coverage. It was a strategy that made sense, especially considering the Spartans were without All-Conference defensive end Steele Castles.

“That was our plan, we wanted to rush three and drop eight,” Diffendaffer said. “We thought we’re going to take a chance and run three at him and play coverage. I loved the plan and I think it was a great plan and we wouldn’t change it.”

After throwing for 237 yards in the first half, Helbig went for another 263 in the second. The senior finished the game with 500 yards passing, six total touchdowns and a 135.4 passer rating.

Despite the loss, Diffendaffer remained upbeat saying, “This game didn’t go the way we wanted it to go but it doesn’t detract from where we want to be. We still have a shot at a league title. It’s a hiccup right now but by no means should we throw everything out…how we respond is the biggest thing we’re after right now.”