When the horse she was riding tripped and fell, Berthoud High School student Ava Zonneveld knew she wouldn’t go on to the next round for pole bending. 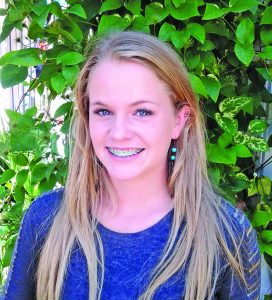 Zonneveld, 17, who competed in the 25th annual International Finals Youth Rodeo in mid-July, raced a Quarter Horse named Dually around a set of poles in two rounds, but the trip prevented her from moving on to the final championship round.

“My horse tripped and fell over on me. I didn’t get hurt, and he was okay,” said Zonneveld, a homeschooled student. “We were lucky, because it was kind of a bad wreck.”

Zonneveld, a rodeo athlete since she was 11, competed for the first time in the International Finals Youth Rodeo, held July 9-14 at the Heart of Oklahoma Exhibition Center in Shawnee, Okla. She was among 800 high school rodeo athletes to compete in the world’s richest youth rodeo with more than $250,000 in prize money and championship saddles and buckles.

“You get an adrenaline rush like no other; the competitiveness of it, I love it,” she said. “It’s the speed, and I love going out there, seeing something I put a lot of work into come together.”

Each event had two long go-rounds, where all of the contestants competed, and a short go with the top 15 contestants moving on to the championship round based on the average scores of their first two rounds.

After she competed in pole bending it was on to the barrel run, using a friend’s horse, but she did not make it to the championship round. Commenting on that horse, she said, “He worked good because he’s young, but we weren’t fast enough to make it to the short go.”

Pole bending involves weaving down a track or the main arena around six poles and returning to the starting point, while barrel racing is a race around three barrels.

Her best time in pole bending is 20 seconds, but her best time in barrel racing is hard to pinpoint, since the size of the patterns can vary. Her breakaway roping time clocks in at 2.5 seconds.

“She’s driven, very goal driven, which makes her a good athlete,” said Kelly Kennedy-Joseph, owner of a ranch and a feed store in the Berthoud area and a horse trainer. “She works hard at the individual events that she does and … she tries to improve her abilities in the arena to build her way up. She tries to better herself every time.”

Zonneveld started riding horses at age 9, soon competing in small rodeos alongside her sisters Grace, 21, and Ella, 15; and brother Grant, 19. She first learned how to run barrels and poles, later becoming interested in breakaway roping. “It’s kind of become a lifestyle for me,” she said. “I love riding and training (the horses). It’s very rewarding. We train all of our horses.”

Zonneveld rides three of the family’s five horses, all Quarter Horses named Dually, Stoney and Roany. She competes in high school rodeos all over the state and other rodeos out of state, and, at age 18, will be old enough for pro rodeo through the Professional Rodeo Cowboys Association. She and her family haul to rodeos every weekend nine months out of the year, excluding the winter months, bringing their horses and equipment to the various competitions.

“I love traveling,” she said. “I’m a very adventurous person, so I like going out and seeing new places.”

After competing in the International Finals Youth Rodeo, Zonneveld went home for one day and immediately headed out to the National High School Finals Rodeo in Gillette, Wyo., July 16-22, but did not place there either. She competed in cutting, where she selected a cow out of the herd and worked to prevent it from returning to the herd. The rodeo was for the top high school students from state finals and covered the United States, Canada and Australia. Speaking about her experience at that competition she said, “I didn’t have the best luck…I was on a horse I hadn’t ridden before.”

But she has won other competitions.

“I’ve won a decent amount of money and some saddles,” she said. “It’s an addicting sport. Once you start, you can’t stop.”

Zonneveld hopes to attend college in Texas and study equine rehabilitation and business. “I want a job I can take on the road for rodeo-ing,” she said.

For now, she is helping Kennedy-Joseph at her ranch and feed store, exercising and feeding the horses and unloading and delivering feed.

“She’s got an amazing patience and love for the horses, and her abilities and her passion show through with each horse she steps on,” Kennedy-Joseph said. “She’s so good and patient with them.”