For many people fishing is a relaxing pastime. You can enjoy sitting quietly honing your skills, listening to the sounds of nature, while finding yourself deep in thought. When you involve dozens of children it becomes a completely different experience, but one that ensures a lot of memorable fun.Saturday, June 10, the Berthoud Sportsman’s Club (BSC) hosted 75 kids at its annual Youth Fishing Day. It was free to the public and drew families with toddlers to teens. 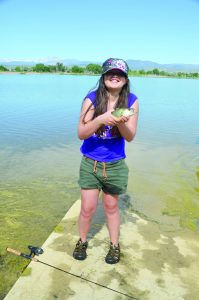 Bella Macaluso, 12, is all smiles as she displays her first catch of the day.

The event was held at Loveland Lake near County Road 1 and Bunyan Avenue in Berthoud, the private lake where the BSC meets to fish and hunt water fowl.“We wanted to give back to the community a little bit, open up opportunities for families to spend time together and fish with their kids,” Tom Witting, a member of the 135-member private club, said about the event.The group loaned poles to anyone who didn’t have their own and gave out fishing patches to commemorate the day. Lunch was also provided by members, who grilled hotdogs for attendees.Chris Brown brought his girls, Rebekah, 4, and Esther, 2, to enjoy the sunshine and share in a pastime he enjoyed while growing up in western Colorado. Chris moved his family back to the state after a decade in Pittsburgh.  “I remember taking them to the zoo there and seeing a rainbow trout and thinking, I don’t want them to only see that in the zoo.”This was Rebekah’s second time fishing. She set the bar high on her first outing in May by catching a 13-inch rainbow trout. When asked what she hoped to catch on this particular day she wisely stated, “I catch what I catch.” She also put safety first and assured this reporter, “I make sure not to hook anyone.” 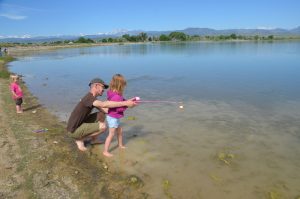 Tavish Fisher, 7, was attending the event for the third year and had a camera at his side, optimistic of documenting his catch. Being a seasoned sportsman, when asked if he was a good fisherman, Tavish replied, “Well my name is Fisher.”  He did however concede, “Sometimes you catch things and sometimes you don’t.”  Even if you don’t snag the big one, he acknowledged playing in the mud around the water was also good fun.The BSC has been hosting the gathering for more than five years and plans on doing so again next year around the same time. For more photos of the event click here.