Berthoud Spike Meet a win-fest for the Spartans 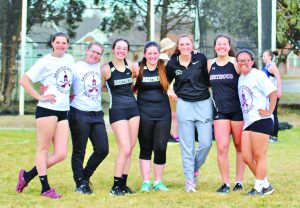 The Berthoud High School (BHS) track and field team posted a total of 33 first- through third-place finishes at the Berthoud Spike Meet held last Thursday at Max Marr Stadium. There were the normal medal winners, or should we say t-shirt winners, as Berthoud gave out t-shirts for top-three placers in each event. Athletes about whom much has been written, like Alyssa Bailey in the 100 meters and the long jump, Cailey Archer in the high jump and 400m, Samantha Mulder in the 100 hurdles, Connor Siruta in the high jump, Ryan Schmad in the long jump and 200m, Jake Rafferty in the long jump, Brock Voth in the triple jump, and the girls and boys sprint relay teams including Archer, Mulder, Bailey, Logan Nissen, Sophia Visger, Jake Rafferty, Siruta, Schmad and Voth. However, training has started to come together for other athletes who had an opportunity to shine this week.

Trinity Buckley won the 100m and 200m dashes, blowing away his personal-best times from previous years and gaining state ranking in both events. Wyatt Woodrick came within an inch of his best long jump from last year, currently placing him third in the state. Woodrick also ran on the closely-contested 4×400 relay. Peter Scheller improved almost two inches in the shot put to win the event. Zac Starkey improved by nine feet in the discus, winning the event. Caleb Kelly placed second in the event. Ty Williams was third in the 400m.

On the girls side, the field events brought in a lot of points. Sophia Visger had a very good day in winning the long jump and getting third in the high jump. Visger is now one of the top-ranked athletes in both jumps, as well as being an important member of the relay teams. McKayla Milan won the triple jump and teammates Jordan Keck (second), Logan Nissen (fourth) and Morgan Kenner (fifth) all jumped within a foot of Milan. Emma Briles won the pole vault and Maddie Kyvick placed fourth. Alex Schultz placed third in her first attempt at the event. Discus throwers Emily Cavey placed second, Kailey Berry third, and Celsey Selland fifth, adding more points to Berthoud’s total. Selland also placed fourth in the shot put. Keck added a third place in the 100 hurdles to her point total.

When Thompson Valley comes to a meet you know the distance races are going to be stacked. Maycee White placed second in the 1600m and fifth in the 800 for Berthoud. White was the lead-off leg of the 4×800 relay and gave the team a lead that Ellie Sundheim, Genevieve Babyak and Julianne Evans-Dennison continued to hold until the baton crossed the line.

The boys distance runners raced head-to-head to find out who were the fastest 800 runners on the team. Three teams of Spartans matched up in the 4×800 relay. Had the Spartans loaded one team, they probably would have won the event instead of placing the first team (Kade Leonard, Noah Burtis, Kevin Sethre, Alex Paradise) in fourth, but according to distance coach, Jordan Jennings, “That time will come. Right now, we need to get some work in.” Many of the distance runners ran three races, using the meet as a way to get in some quality training. Leonard placed fourth in the 1600 and Tyler Markell was also fourth in the 800.

Andrew Walker continued to improve in the 300 and 110m hurdles, setting personal-best times on his way to a fourth- and fifth-place finish, respectively. Milan took third in the 300 hurdles.

There were some notable performances by freshmen, many who were competing in their first varsity meet. Donovan Garvin placed third in the triple jump in his first high school meet. Maddie Davies was sixth in the shot put. Ellie Sundheim was eighth and Genevieve Babyak was 10th in the 1600. Ellie Dodd placed 11th before she had to leave to prepare for the play at BHS that night. Eli Greenslit placed 10th in the 1600. Maggie Horsch and Eliana Paradise each placed eighth in their respective jumping event.

Having competition brings out the best in an athlete and that is what Skyview High School and Berthoud did for one another in the relays on the boys side. Berthoud won the 4×100 relay, but Skyview took top honors in all of the other relays, with Berthoud chasing their heels the whole way. All of Berthoud’s relays are now ranked for state qualifying. Berthoud’s girls won every relay contested, but no other team was anywhere near the Spartan girls. All girls relay teams are ranked for state qualifying except the 4×400 which is one second away.

Berthoud won the meet with a combined score of 190 points with Thompson Valley took second and Skyview third.