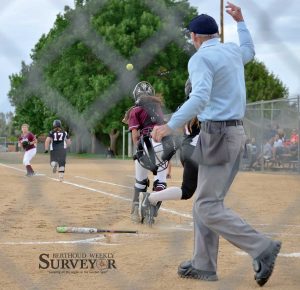 Berthoud catcher Hannah Langer gets a runner out at home and throws to first baseman Madison Herbert in an attempted double play against Roosevelt at Berthoud High on Sept. 3.
John Gardner / The Surveyor

Five games, or just about one-quarter, of their way through the regular season schedule and the Berthoud High School softball team has the look of a squad that is good, but not yet great.

The Lady Spartans have won the three games they were expected to win and lost two others against teams – Erie and Frederick– who occupy space in that “great team” category to which Berthoud aspires. Erie and Frederick are ranked No. 2 and No. 3, respectively, in Class 4A according to Colorado High School Athletic Association. Berthoud is ranked No. 7.

Berthoud Head Coach Buddy Kouns said even in the games they have won this year his team has not played as well as they can, but he is not overly concerned.

Berthoud 6, Roosevelt 0
Playing at Bein Field in Berthoud on Thursday, Sept. 3, the Lady Spartans won one of those games they were expected to win in shut-out fashion, besting then-winless Roosevelt 6-0 thanks to the work of their two senior pitchers – Larissa Royer and Taylor Armitage.

Royer, who got the start and tossed four scoreless innings from inside the circle, struck out six Lady ‘Riders and effectively dealt with the traffic on the base pads created by the two walks and three singles she surrendered. 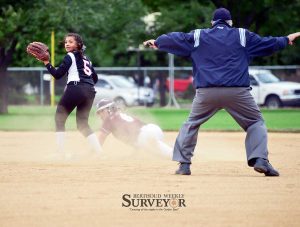 Berthoud’s Taylor Armitage is called safe after stealing second base in the Sept. 3 game vs. Roosevelt.
John Gardner / The Surveyor

“Larissa didn’t have her best stuff but she went four shut-out innings today, still a nice job,” Kouns said after the game.

Royer nearly broke a scoreless tie in the bottom of the second when she got ahold of a pitch and drove it deep to left field, sounding off the bat like it would be a homerun, only to see the ball get held up by a strong westerly wind and drop in the outfield for a double. It was enough, however, to score Delaney Fouts who had reached on a fielder’s choice earlier in the frame.

Berthoud broke the game open in the bottom of the fourth when Sydney Kouns and Sarah Jorissen, who each notched two-out base hits, and Royer, who reached courtesy of walk, came around to score when a ball off of Armitage’s bat was misplayed and dropped in shallow left field. Jorissen, the team’s lone freshman, scored again in the sixth –as did Armitage – pushing Berthoud’s run total to six.

Jorissen explained after the game that it has been a challenge being the only freshmen on a 12-player roster that has eight combined juniors and seniors.

“It pushes me a lot, it makes me a better player and I like it,” Jorissen said. “The first game I was really nervous, but I feel more comfortable now just doing what I do.”

Entering the top of the fifth, Berthoud made an unexpected pitching change as Royer and Armitage flip-flopped positions, with Royer taking Armitage’s spot at shortstop.

“We talked about it between the fourth and the fifth, [Royer] didn’t feel like she had as much velocity, so she didn’t have an out pitch.”

Armitage entered and picked up where Royer left off, allowing only one base runner and striking out five in three innings of work.

“One, two, three was coming up and we collectively decided it would be a nice change of pace to bring Taylor in and Taylor threw three Taylor-like innings,” Kouns said.

Frederick 5, Berthoud 1
Berthoud was unable to extend their win streak to four games on Sept. 8 when they ran into the softball buzz saw that is the Frederick Lady Warriors. The 2014 Tri-Valley Conference (TVC) champions and 4A state runners-up bested the Lady Spartans by a 5-1 final tally.

Frederick’s Alicia Hernandez allowed just six hits and fanned 10 Berthoud batters on her way to notching her fourth win of the 2015 season. Armitage surrendered nine hits and struck out seven, but Frederick sophomore Maddie McCullough tallied a pair of doubles and drove in two runs, providing the Lady Warriors all the runs they needed to send Berthoud home in defeat.

The road will not get any easier for Berthoud (3-2, 2-2) as they will welcome Windsor (5-2, 2-2) to Bein Field on Sept. 10 before traveling up to Loveland to play host for the annual Spartan Classic at the Barnes Complex on Sept. 11 and 12. The Lady Spartans are the defending champs at their namesake tournament.