An awful lot can happen in the nearly five hours it typically takes to complete an 18-hole round of golf. No matter how talented or experienced the player, over the course of playing the course, one will have highs and lows, surprises and disappointments and moments of elation and dejection. 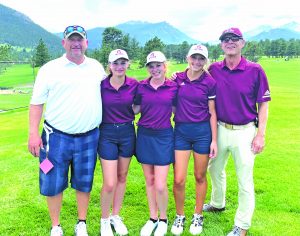 These ups and downs can be more emotionally taxing when it is all on the line. That was the case last Thursday at the 3A Region 3 championship tournament held at the Estes Park golf course. Yet, when all was said and done, the three young women from the Berthoud High girls golf team who competed in the event were proud of their rounds.

Sophomore Anya Knoll turned in a magnificent performance, carding a 100 and taking fourth place to easily earn a spot in 3A state championships. Fellow sophomore Ashley Russell placed 13th, shooting a 120, and earning the last state berth out of the region. Freshman Brooklyn Tychsen gained valuable experience in the event but barely missed qualifying for state.

“All I asked from all three girls today was just to continue to compete. Coming here with two sophomores and a freshman and they’re competing against seasoned girls, however, this is a game that is very fickle and you’ve got to make sure you keep your head in the game the hole time and if you don’t, large numbers can creep in, and you don’t need that,” said Berthoud Head Coach David Hunn. “Today didn’t have to be the best round, although Anya played spectacular, it just needed to be a round good enough to go to state … and they realized that this round is no different than any other round.”

Both Knoll and Russell said they battled nerves early in their respective rounds. “The first two holes were really nerve-wracking, I remember I was putting on the first hole and I was shaking while I was putting,” Knoll, who carded a triple and double bogey on her first two holes, explained. “But after that, I remember standing on the green on the third hole and I was thinking ‘this is how I should feel when I’m playing golf and I really relaxed.” Knoll finished the front nine with a score a of 52.

“When Hunn got with me he started to realize that my tees shots were going right so I had to line up a little bit more left what I had been doing and once I did that I started hitting fairways and had clean shots to get up to the green,” Knoll said.

As she worked her way around the back nine, Knoll knew she was well-positioned to reach her season-long goal of making state. Even with state well within reach, she did not let up.

On the par-5 17th hole Knoll hit a good drive the trickled into the rough with an uphill lie. She played it safe, hitting a middle iron to get into the fairway, and after laying up with her third shot, she attacked the pin on her approach. The ball rolled onto the fringe above the cup and, after finding her line, the sophomore executed a perfect 20 or so foot chip shot, using the contours of the green and the ball found the bottom of the cup for par.

“Coach and I went over it together, where I wanted to land it, and that green funneled right to the hole so if I could get it right into that one spot it would roll pretty close, we didn’t expect it go in and when it did that was just the cherry on the top,” Knoll said of her par-saving chip-in. She followed up with another far on 18, finishing strong to take fourth and best her practice round score by three strokes. “I’m really excited, it’s been a lot of hard work and yesterday at practice I was just thinking how much I want to make it to state and do better than my practice rounds and I did it and I’m happy about that,” she said.

Russell also remarked on her nerves prior to her round. “I was kind of a nervous wreck when I got here this morning, it’s my sophomore year, I want to do well, I have these goals set for myself and I want to accomplish those and knowing I was this close to them, it was a lot to comprehend and a lot of emotions I just couldn’t process right at the moment,” she said.

As she traversed the course, she had some highs and lows but kept at it. Entering her final few holes, Russell she was right on the cut line, unsure if she would make state. Her final hole of the day was admittedly not her best and after putting out to post a crooked score, she was overcome with emotion, convinced she would come up short.

Yet as the other golfers were finishing their rounds, Russell began to see her name hovering around the cut line. When word came down that she earned the 13th and final ticket to state, the flood of emotions came back, but this time of a joyful variety.

“Now, it’s a lot of emotions, not the same as this morning, but now it’s just relief and happiness that I made it and that I am going to state because that was a big goal I had for myself at the beginning of the year,” Russell said with an ear to ear grin. “It feels great, I’m relieved and I’m very happy and I’m proud of myself because it’s a goal I set for myself and I’m there.”

Said Hunn, “I’m proud for the way they stuck with it. It’s awesome for our program, it’s awesome for the school and the town of Berthoud, Berthoud is going to be a golf town, I truly see it, in the years to come.”

The two-day, 36-hole 3A state championships will be contested June 21-22 at Elmwood Golf Course in Pueblo.