Three Berthoud schools want to encourage youth to walk, bike or skateboard to school Oct. 10 in the hopes of getting some sidewalks. 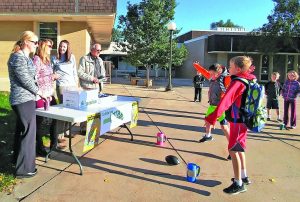 Berthoud’s participation will be included in a Colorado Department of Transportation Safe Routes to School Infrastructure Grant application to fill in missing sidewalks and improve damaged sidewalks in the areas around the three schools.

“The overall need is for our community to be able to navigate the town safely. Whether it be walking, biking or driving, we all need safe routes to get around,” said Kelsey Byron of Berthoud, a volunteer with TSD and the Town of Berthoud. “Increased growth in the area, in addition to deprived busing and recent events, have contributed to concerns for walking and biking safety in the area.”

“This event is a great way to allow students the chance to learn and demonstrate safe travel as well as physical wellness,” Byron said.

An estimated 30 volunteers — encouraged to wear red to represent “stop and look” — will help at the elementary schools by walking with students or serving as crossing guards along the designated routes to the schools. The Larimer County Sheriff’s Office and the Berthoud Fire Protection District will also staff some of the intersections along those routes, and Berthoud Bicycle will offer safety checks for the students who bike to TMS.

“Once they arrive at school they will be incentivized by a small prize, but it’s up to the school,” said Mechelle Matz-Mayfield, Safe Routes to School coordinator for TSD.

Since 2009 the Walk to School Day has been offered in Loveland every October, as has the Bike to School Day every May. The City of Loveland originally organized the events at Loveland schools, and the district took them over in 2015, expanding the coverage to the entire district. That year Ivy Stockwell joined the event.

“It helps encourage healthy habits and reduce traffic around the schools,” Matz-Mayfield said. “We like to make it as fun as possible for kids.”

The district and the Town of Berthoud will be able to include Walk and Bike to School Day on the Safe Routes to School grant application. CDOT provides federal funding to local government and law enforcement and other agencies that want to develop or improve safe school routes for students in grades K-8 through program and infrastructure grants.

The district and town need to show the need for the infrastructural changes, demonstrated in part from feedback through student and parent surveys about what they observed regarding the routes to the schools. They also need to show demonstrated community support, such as through the event.

“What makes this event most fun is all of our community coming together for awareness of our safety,” Byron said.

Byron and Natalie Vogt of Berthoud received the town board’s support for the grant application at the August town board meeting, following the distribution of a petition in fall 2017 to garner community support. The town will submit the grant by the Nov. 1 deadline and results will be released in April or May 2019 with work required to be completed in three years.

The grant is a partial-matching grant of 20 percent from the town and the rest in grant funds.

The town is applying for the maximum amount of $500,000 but could receive less than that — the total available amount is $4 million for all applicants, said Chris Kirk, town administrator for the Town of Berthoud.

The grant, if received, would be used for sidewalk and other improvements that will also include installing ramps, addressing safety issues, and potentially adding bike lanes, along with a required component of providing bicycle and pedestrian safety education. The district already has programs in place, and the money would go toward those programs.

In August the town began conducting a town-wide sidewalk analysis, called the ADA Evaluation and Transition Plan, and is in process of determining the final locations for sidewalks and where best to create pedestrian routes to connect businesses, parks, and schools, as well as making sure the access is ADA compliant. The analysis will be included in the grant application materials.

“We’ll use it for the purpose of the grant, but we would have done it anyway,” Kirk said. “One of the highest priorities we have is the safety of the kids here in town.”