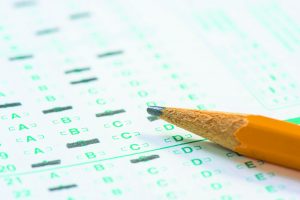 The results for the Colorado Measures of Academic Success (CMAS) testing, SAT and PSAT for the 2016-17 school year have been released. Berthoud schools, across the board, scored above the state average in math, ELA and science. However, individual grades and subject scores were mixed at the local, district and state level.

Overall improvements were seen statewide on CMAS tests that cover language arts and math with only a few grades showing slight decreases in scores. Thompson School District’s scores were above the state average in almost half of all categories. Berthoud schools reflected similar results showing improvement in some areas but also indicating areas for improvement.

Locally there were marked improvements in the percent of students who met or exceeded expectations in several grades and subjects. Third and fourth-graders at Ivy Stockwell Elementary increased the number of students who met or exceeded expectations by more than 17 percent in ELA. Turner Middle School (TMS) seventh-graders increased over 14 percent in ELA as well. Berthoud Elementary third-grade math scores increased by 12 percent and algebra scores at Berthoud High School (BHS) jumped 9.6 percent.

Areas that saw a decrease in the percent of students who met or exceeded expectations included eighth-grade math, with a decrease of 18.8 percent, Berthoud Elementary fourth-grade math down 14.6 percent, and BHS geometry scores dropping 7.6 percent over 2016.

TMS had the lowest percentage of students in any category that met or exceeded expectations with only 14.5 percent of eighth-graders meeting the standard in math. TMS algebra students did however receive the highest percentage among Berthoud schools with 86.6 percent meeting or exceeding expectations.

For Berthoud schools, the majority of grades and subjects resulted in more than 50 percent of students meeting or exceeding expectations. Berthoud Elementary averaged the highest percent of these students and TMS had the lowest.

According to the Colorado Department of Education 178 school districts comprised of 1,800 schools participated. Approximately 550,000 students were tested.

BHS students in ninth and 10th grade who took the PSAT last April had a mean average of 499.8 on the reading and writing portion and 483.7 in math. These brought them above both the state and district averages.

BHS students who took the SAT averaged a 545.9 in reading and writing and 530.1 in math compared to the state mean average of 513.4 and 500.9 respectively. These scores did reflect a decrease of 5.2 points from the average score the previous year.