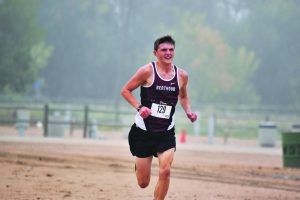 Kade Leonard shatters his previous best time at the Andy Myers Invite last Saturday in Greeley. The junior finished in 18th place with a time of 17:25.

When the Berthoud High School (BHS) cross country boys team toed the starting line at the Andy Myers Invitational in Greeley, the fog was heavy enough to limit viewing distance to a quarter mile. The mist in the air, combined with a flat course with solid footing, created conditions for a very fast race.

Seven athletes from Rapid City Stevens (South Dakota) took off at a blistering pace not usually seen in races at altitude. Kade Leonard, Noah Burtis and Jonathan Wyrwas were in the second pack of boys hunting those who would fall off of the pace. Siler Stein, Kevin Sethre, Kyle Conlon and Carlos Gutierrez were close behind in the next group. The course took a turn around a lake where very few spectators dared to venture. When the boys returned from a mile around the lake, 12 of Berthoud’s athletes had positioned themselves in the top half, most on their way to setting personal bests.

By the two-mile mark, Leonard had moved into 18th position. He managed to hold on to that place and finished in 17:25, a time that shattered his previous best time, set last week, by 17 seconds. The junior is now ranked in the top-50 runners in 3A in the state with this time.

About 30 seconds after Leonard passed the two-mile mark, Berthoud fans were not surprised to see Burtis and Stein in their normal positions in second and third place. However, running with them, was freshman Eli Greenslit. By the end of the race, Greenslit had passed the upper-classmen and finished in 17:54, more than two minutes ahead of his 19:55 time the week prior, to take 28th place. Burtis ran 17:58 and Stein 18:00 for 31st and 32nd place, respectively. Sethre finished just 15 seconds later in 38th place with a time of 18:15.

Wyrwas has been racing at the sub-varsity level all season as required by CHSAA transfer rules. Wyrwas accepted the challenge in his first varsity race as a Spartan, finishing in 41st place with a time of 18:20. Conlon and Gutierrez raced to the finish in 18:33 and 18:34, respectively, to take 51st and 52nd place. The boys team placed sixth out of 12 teams.

Berthoud always seems to run well in Greeley, and this year the Lady Spartans continued the tradition, with Maycee White and Cailey Archer positioning themselves close to the front of the pack. The runners from Rapid City Stevens began to feel the effects of oxygen debt about halfway through the race. The Colorado athletes, including White and Archer, moved closer to them. However, the gap was large and the two Spartans could not make up the entire gap. The chase effort led White to break 21 minutes for only the second time in her career with a time of 20:57 to finish in 14th place. Archer also ran an incredible race and finished in 23rd place in 21:27.

Ellie Sundheim was Berthoud’s third scorer in 41st place in 22:57. Also running her fastest race of the year, Kathryn Mathiesen was not far behind Sundheim in 23:15 for 50th place. Liz Bosnich rounded out the scoring by running 23:31 for 56th place. After weeks of working through an injury, Julianne Evans Dennison finished her first race of the season with a personal-best time of 23:44 for 61st place. Every week this season, Kim Blough has improved. This week she ran 24:51 for 78th place. Berthoud’s girls team finished in sixth place in the 10-team field.

The freshmen and sophomores will travel to Northglenn for the Pat Amato Freshman/Sophomore meet. Championship season begins on Oct. 10 when the entire team competes at the Tri-Valley Conference meet at Holy Family.