On Thursday, July 12, the Berthoud Parks, Open Space, Recreation and Trails (PORT) Committee, held a community open house for residents to provide feedback on the master plans for the proposed recreation center and parks expansion in town. The open house was well-attended with up to 75 residents sharing their feedback. 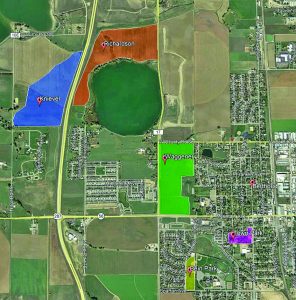 WENK Associates, the landscape architecture firm contracted by the town to develop the plans for Waggener, Richardson, Knievel and Town Parks, had previously presented two separate plans for Richardson and Waggener Parks, one that included the rec center and one that did not.

The master plans, originally laid out on July 9, included four different areas to be developed and upgraded. They were, Knievel Park, located due west of Loveland Reservoir on the western side of US 287, Richardson Park on the north shore of Loveland Reservoir and south of the Hammond Farms development, Waggener Park located on the northeastern corner of the intersection of Berthoud Parkway (formerly County Road 17) and Mountain Avenue and, finally, Town Park located north of Ivy Stockwell Elementary School to the west of Fifth Street.

After the initial proposal, some alterations were made to the original plans. A significant change was two separate plans were presented at the open house for Town Park, one which included a pool (outdoor aquatics) and one that did not, in the latter case aquatics facilities would be located within and around the rec center.

The feedback on the location of the rec center was split; a majority of residents preferred it be located at Richardson Park, but a sizable minority stated a preference for Waggener, due to its closer proximity to downtown. Residents also expressed a desire for no ball fields or soccer fields at Waggener Park, given the large number of homes on the proposed park’s eastern border. Also, residents expressed a desire for the outdoor pool to be upgraded to accommodate the town’s growing population and for the pool to be located at either Town Park, where it currently resides, or at Waggener Park to keep the pool close to the heart of town.

A number of residents were concerned about the cost of the plans, with some stating that knowing what the rec center and park improvements and expansions will cost would be a key factor in their decision to support or oppose the proposals.

Feedback on the two plans for Town Park largely revolved around the pool. The majority of respondents expressed that, should the pool remain at this location it must be upgraded and expanded. Those who preferred the pool remain at Town Park said that was their preference as the central location allows their children or walk or bike the park to use the pool. The proposal for the civic gathering space at Town Park was well-received and many suggested the proposed pavilion/bandstand be moved to a central location in both plans as it would allow performances to be viewed by more people.

Feedback for Waggener Farm Park largely centered on the recreation center, with nearly three times as many respondents saying they prefer the center be located elsewhere. In general, the desire seems for Waggener to be more open-space oriented, with walking paths, conservation areas, native/natural areas, picnic space and the like.

A large number of respondents prefer Richardson Park be the location for the rec center and the park also include most of the new soccer and ball fields, so long as there is adequate motor-vehicle parking, as the location prevents the park from being accessible via walking and biking for most residents. There is a strong desire for the parks to be connected via trails and each having various loop trails and walking space; this was a common theme received in the feedback on the plans.

The plans for Knievel Park included more outdoor recreation activities such as disc golf, archery, and a dog park which was generally well-received by attendees. Residents also expressed a preference for large, open-space areas, including a community lawn or multi-purpose field. Loop trails and connections to regional trails were also listed as desirable at this park.

Further information, including the draft concept plans for each park, can be found on the town’s website.